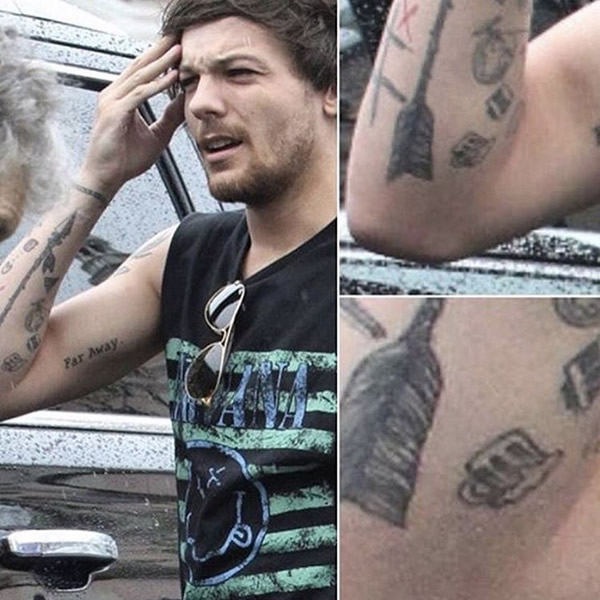 Louis Tomlinson has a teeny-tiny tattoo of a beer mug inked in black and white on the inside of his right forearm, next to his arrow and globe tattoos, and very close to his elbow. Together, along with a tattoo of a paper airplane, a stick figure riding a skateboard, a cup of tea, a bomb and a horseshoe, among other tiny tats, these pieces make up a sort of jumbled half sleeve for Louis Tomlinson. It’s likely Louis’ beer mug tattoo was done in December 2015, during the same session that resulted in the tattoo of the number “28” on the pop star’s fingers and his infamous penguin butt tattoo.

It was while Louis was in Chicago, visiting then-girlfriend Danielle Campbell’s family, that he hit up the Great Lakes Tattoo shop for some new ink, leaving with the number “28” tattooed on the index and ring fingers of his left hand and some other mysterious pieces, which weren’t revealed until much later. It was believed at the time that Louis had added additional tattoos to his arm and rear end, and the tattoo on Louis’ butt ended up being an image of a penguin wearing headphones, which the somewhat embarrassed singer confirmed during a radio interview with 102.7 KIIS-FM in January 2017. Danielle Campbell’s brother got the same butt tattoo, by the way.

It’s been quite a long time since that trip to Chicago, but it was only recently that we finally spotted the new ink on Louis’ arm featuring a small, overflowing beer mug, which was reportedly done during that same session at Great Lakes Tattoo. All of Louis Tomlinson’s tattoos that day were inked by tattoo artist and owner Nick Colella. Although he’s had the arm tattoo for over a year, Louis hasn’t revealed the meaning behind the ink, though we’re guessing he got the tattoo simply because he appreciates a good pint. What do you all think the significance behind Louis’ beer mug arm tattoo is? 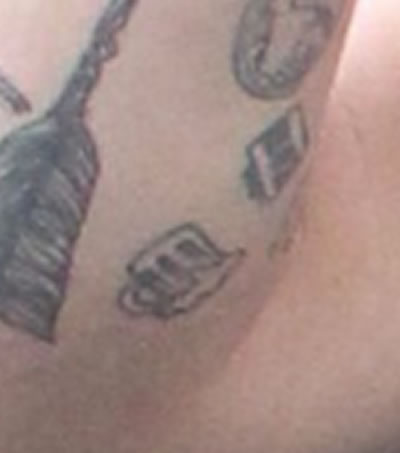 A special thanks to PST fan Mimi for help in discovering this tat!