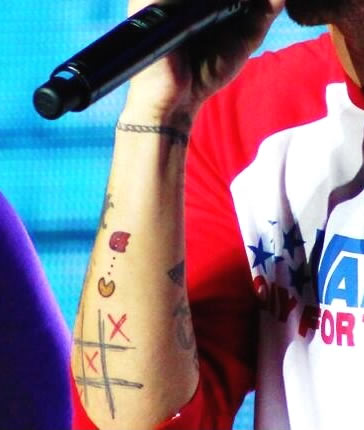 Unlike other celebrities who can’t wait to show off their new tattoos on Instagram or Twitter, One Direction’s Louis Tomlinson is slightly more discreet when it comes to getting new ink. Despite all the eagle-eyed 1D fans out there who seem to be as obsessed with tattoos as the singers are themselves, Louis will sometimes get a tattoo and let days, weeks or even months go by before finally revealing it to the public. In some cases, like the small triangle tattoo on his ankle, he doesn’t let on that he’s been inked at all….until we discover it, that is! It’s okay though, we like a challenge 🙂

While Niall Horan opted for a fake fern tattoo to celebrate the New Zealand leg of One Direction’s Take Me Home tour, Louis and Zayn decided to go and get some real ink. During an interview with ONE News on October 13, 2013, the band members revealed that they had both gone under the needle two days before, on October 11, in Auckland. “We went and did a bit of shopping [on Friday], and we got a couple of tattoos,” the boys said. Zayn added a snake tat to his shoulder during the tattoo session, and Louis decided to get a tattoo in honor of Pac-Man, the incredibly popular arcade game from the 80s. Louis’ Pac-Man tat is located on the outside of his right arm, next to his tic-tac-toe tattoo, and features the iconic Pac-Man dude inked in yellow, perpetually chasing after a red ghost. 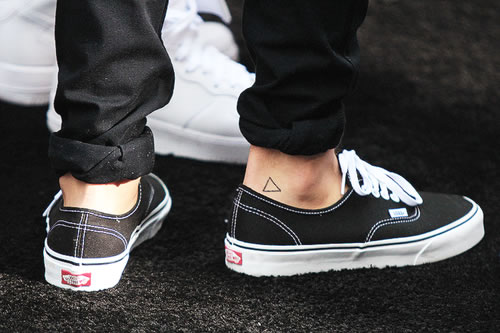 On a couple different days in August 2013, Louis sported some high-water pants and shoes without socks, which gave us a rare glimpse of the small triangle tattoo the singer has on his ankle. Louis Tomlinson’s tattoo is inked on the outside of his right ankle and features a small, simple triangle outlined in black. It’s possible that the triangle tat is meant to be a prism, similar to the Pink Floyd “Dark Side of the Moon” prism tats both Harry Styles and Zayn Malik sport. However, because a triangle is apparently a common gay symbol, Louis’ ankle tat has sparked rumors (yet again) that he and Harry Styles may secretly be an item. Harry fed fuel to this fire when he tweeted on August 21, 2013, “You can tell a man by his ankles.” Some people believe this cryptic message was in reference to the triangle tat on Louis’ ankle (although we think it could also be referring to Harry Styles’ quote ankle tattoos). 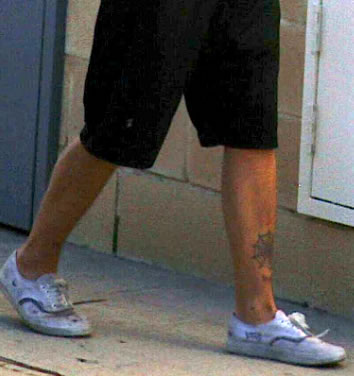 During the same tattoo session that landed a cool retro Pac-Man tattoo on Louis Tomlinson’s arm, the singer got inked with yet another spiderweb tattoo, this time on his leg. “I have a little Pacman and then I got a web on my leg, but I’m not going to show you ‘cos it hurts,” Louis said during a ONE News interview on October 13, 2013. Louis’ spiderweb tattoo is located on the front of his left shin, above the “Rogue” tattoo tribute to the singer’s old band, and features a pretty large circular spider web inked in black. It was inked while he and Zayn were doing a little shopping in Auckland on October 11, during the New Zealand leg of One Direction’s Take Me Home tour. Louis must hold a special place in his heart for spiders, or he must be a huge Spiderman fan, because the singer just got a small spiderweb tattoo inked on his arm in June 2013, along with his bomb and match half-sleeve tattoos.

One Response to: Louis Tomlinson’s Triangle, Pac-Man and Spiderweb Tattoos