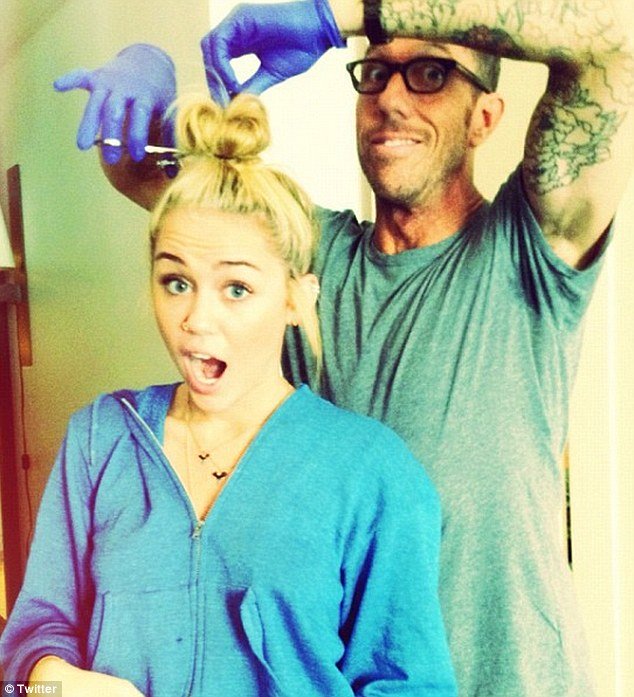 The most recent Miley Cyrus media frenzy surged onward after the singer/actress shared pictures of herself on Twitter, rocking a brand new (and drastically different) ‘do. Check out pictures of Miley Cyrus’ new haircut, in which she sports platinum tresses and some razor action on the side of her head. Is it just us, or should the tatted-up guy the 19-year-old calls her hairstylist have taken it a little easier on poor Miley’s hair? We’re not quite sure how we feel about Miley pulling a Britney Spears and going half-bald; tell us what you think!

It looks like Miley Cyrus may turn to her hairstylist for more than just advice on cuts and colors. In new pictures of Miley’s drastic, punk-rock haircut, you’ll notice a heavily tattooed dude preparing to chop off the singer’s signature bun. Putting aside the fact (for now) that Miley opted for a pixie-cut-gone-punk over her previously mature and elegant crop style, we’re wondering who the crazed-looking guy behind the scissors (and tattoos) is. Ah yes, Chris McMillan, hairstylist to the stars, California born and bred, and pegged Hollywood’s “Mane Man.” Clever. McMillan’s resume has included such stars as Sandra Bullock, Cameron Diaz, Gwyneth Paltrow and Courtney Cox. And now Miley Cyrus.

Miley Goes Platinum and then Pixie

Just last week, Miley shared photos online of her platinum hair, also courtesy of Mr. McMillan, which replaced the uncharacteristically mature hairstyle she was rocking previously. Miley has certainly transformed herself in recent years, moving from a Disney star known among the younger generation; to an ultra-fit, Pilates-obsessed singer and actress; to the proud owner of 15 tattoos; to a newly-engaged, mature 19-year-old. We can’t help but wonder what prompted this sudden move to a platinum blonde, rocker-chick hairdo? Could Miley’s edgy new haircut have been the brainchild of McMillan alone, whose numerous arm tattoos may have also served as inspiration for Miley Cyrus’ tattoos? And what about that new nose ring?

Miley May be Rocking the New “Rachel” 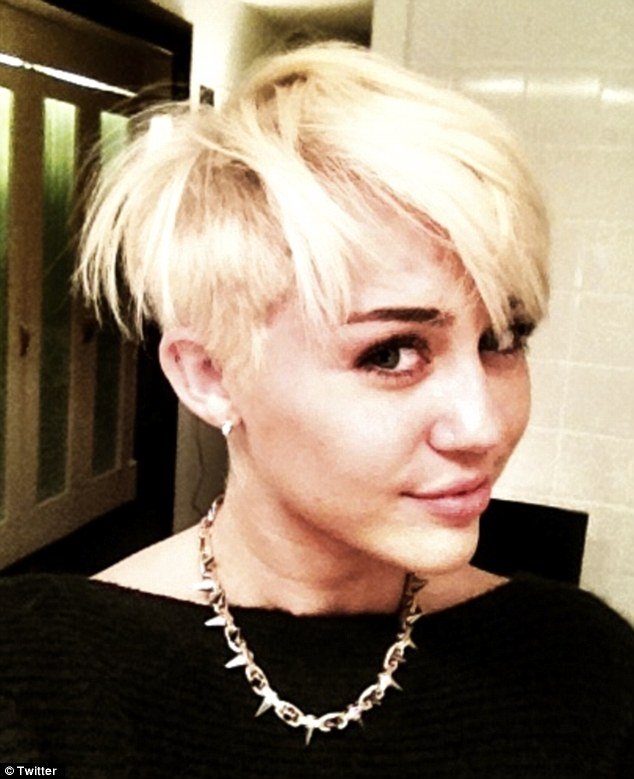 McMillan has been credited as a trendsetter in the way of hairstyles, and his most well-known contribution to the industry so far is the “Rachel,” the infamous cut he gave Jennifer Aniston during her Friends days that would prompt millions of imitations and come to be known by every fashion and entertainment publication in the world. Although McMillian’s signature style is “innovative, loose and sexy,” it seems like he was thinking way outside the box when he took his scissors and peroxide to Miley Cyrus’ hair. Regardless of all the naysayers out there (and there are many) the singer appears to be a fan of the new ‘do, as she posted the following messages after lopping off her longer locks: “Never felt more me in my whole life,” and “LOVE my hair. feel so happy, pretty, and free.”

Will Miley Cyrus Get a New Tattoo Soon?

Just when we thought Miley was going to settle down with fiancée Liam Hemsworth and put an end to her wild child days, the singer claims that she wants a “long engagement,” dyes her hair platinum blonde, shaves the side of her head, gets a nose ring, and starts talking about being free. If we didn’t know any better, we’d say that a new tattoo may be in Miley Cyrus’ not-so-distant future as well! Who knows, if Chris McMillan is the inspiration behind Miley Cyrus’ tattoos, the “Party in the USA” singer could end up with a couple of full sleeves. Stay tuned to find out!