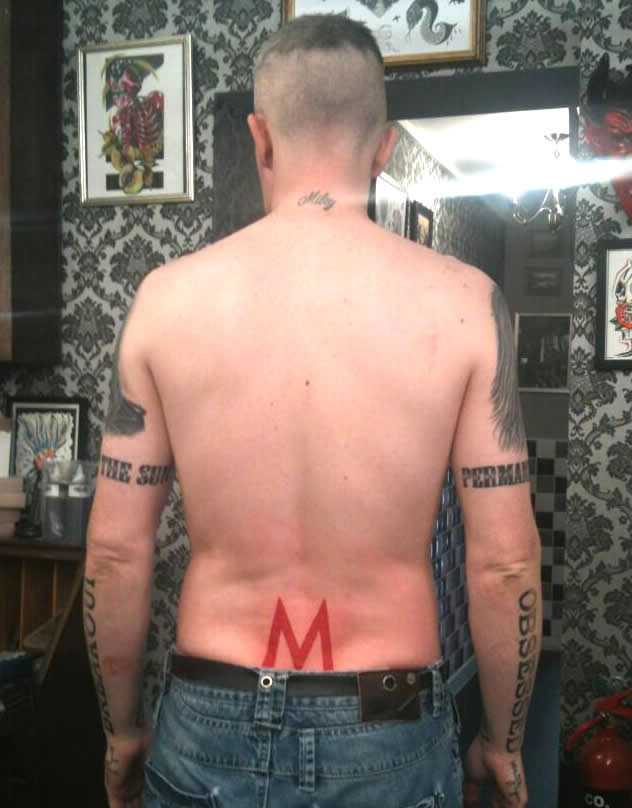 You have to admit, when you found out there was a 40-year-old man out there with a whopping 17 tattoos dedicated to Miley Cyrus, you thought it was pretty creepy. Well, now that very same man has 19 Miley Cyrus-themed tattoos, thanks to his go-to UK tattoo artist, who really needs to just put the needle down and walk away already. The man we are referring to is the unforgettable Carl McCoid of Bridlington, England, who recently had tattoos number 18 and 19 inked on his body as a tribute to the pop star he credits with helping him get through a difficult divorce. We’re wondering, was the divorce before or after the tattoo obsession? Cause if it was after, you really can’t blame a girl.

“M” Logo on His Lower Back

Carl McCoid has made headlines all over the UK and the U.S. for his unhealthy Miley Cyrus obsession, which has led the 40-year-old to devote large portions of his body to more than a dozen Miley fan tattoos, including at least three portraits of the pop star, her song titles, her signature and more. Well, just last week, Carl McCoid, who calls himself MileyCyrusCarl on Twitter, added two new Miley Cyrus tattoos to his collection, bringing the impressive total up to 19. That’s right, MileyCyrusCarl hit up tattoo artist Stuart Rollisson of the Black Lantern tattoo shop yet again, and the Miley super fan had a huge letter “M” inked in red on the middle of his lower back in honor of the singer’s logo.

He didn’t stop there though. The 40-year-old also had the words “City of Angels,” inked in black script on the right side of his neck, just below his ear. 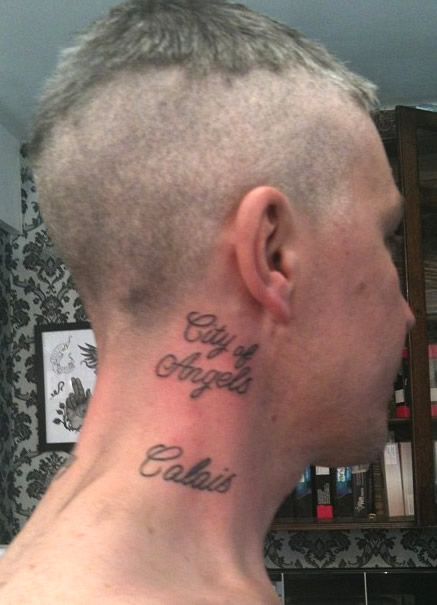 These are a few lyrics from Miley’s track “Take Me Along,” which is from her third studio album Can’t Be Tamed. In the song, the pop star sings “The city of angels is lonely at night / Keep myself alive by candlelight.” Slightly below the “City of Angels” tattoo on his neck, Carl McCoid also had the word “Calais” inked in a matching black script. According to Carl, his new tattoo additions are “to celebrate the fact that Miley has just got number one in the Maxim Hot 100 list of the world’s sexiest women.”

Is Miley’s Album Cover Next on his Tattoo Radar?

There are plenty of impressive tattoo collections out there, but none like Carl McCoid’s, which has earned him worldwide notoriety. No joke – the man has made national and international headlines, he’s been featured in documentaries, he was on BBC’s “Never Mind the Buzzcocks,” and he even appeared on German television. Carl McCoid is known as the “Miley Cyrus tattoo man” by Bridlington locals, and by the rest of us…well, we’d rather not say. Whether the recognition is positive or negative though, Carl McCoid says he is determined to follow through with his passion for her and tattoos. According to the Miley Cyrus super fan, when the pop star comes out with her new album in a few months, he will consider having the full album cover added to his tattoo collection. We can hardly wait. You can check out a bunch more pics at Carl’s website,