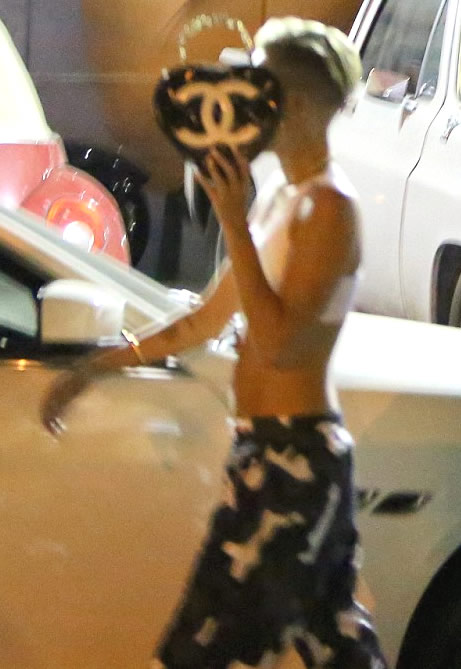 Although most of us still haven’t recovered from Miley Cyrus’ scandalous twerk-fest at the VMAs, the inked-up singer apparently found her controversial performance a reason to celebrate, since she was spotted (again) at a tattoo parlor in Los Angeles just last week. The tattoo shop in question is High Voltage Tattoo in West Hollywood, which has been featured on the show LA Ink and is home to queen of tattoos Kat Von D. Kat is responsible for a number of Miley Cyrus’ tattoos, including her three most recent – the crossed arrows tat, anatomical heart tattoo and claw tat on her right arm, so we wouldn’t be surprised if Miley commissioned the tattoo artist to the stars to add another piece to her growing collection.

Miley Loves Showing Off Her Tattoos

It was just two weeks ago that Miley Cyrus finally revealed the ink she got in early August, but the curved claw tattoo on her upper arm apparently wasn’t enough, since Miley may have gotten inked yet again. On August 29, the pop star was spotted being driven to High Voltage Tattoo in Los Angeles by a bearded male friend – notably not Liam Hemsworth, who is reportedly not a huge fan of Miley Cyrus’ tattoos. Prior to the tattoo excursion, Miley spent time at a friend’s house in L.A., sporting denim booty shorts and a denim crop top that showed off the crossed arrows tattoo and anchor tattoo on her right arm. After a quick change into an even more revealing white crop top and baggy camouflage pants, the singer headed to High Voltage tattoo for what may have been a new tattoo.

With 19 tattoos and counting at the age of 20, it wouldn’t come as a huge surprise if Miley Cyrus got another tattoo, especially since the singer seems dead set on moving as far away as possible from her innocent Hannah Montana image and establishing herself as the resident bad girl. And who better to ink Miley’s latest tat than one of the singer’s favorite tattoo artists – Kat Von D!