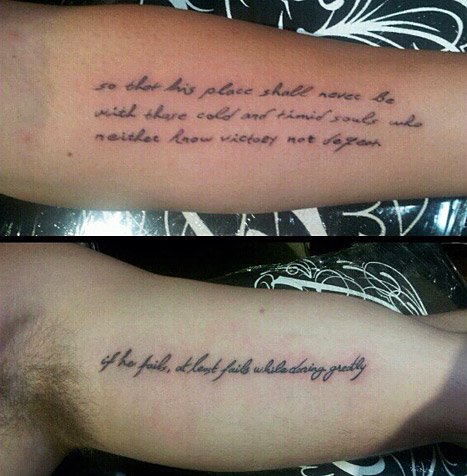 Liam Hemsworth and fianceé Miley Cyrus got matching sugar skull tattoos last year, and now the 22-year-old Australian actor can’t seem to stay away from the tattoo parlor. On October 10, 2012, Liam posted a pic on Instagram of his new arm tattoo alongside Miley’s, and it’s clear the two are taken from the same inspirational “Citizenship in a Republic” speech delivered by Teddy Roosevelt in 1910. The line tattooed on Liam’s arm comes directly before the excerpt Miley Cyrus got inked on her arm in July, with one tiny but glaring mistake. Check it out!

When it comes to tattoos, Liam Hemsworth appears to be following in the footsteps of his 19-year-old fianceé Miley Cyrus, who has 16 tattoos of her own so far, and counting. First the couple debuted the matching sugar skull tats they got inked on the inside of their right feet, and now Liam has added to his tattoo collection with an inspirational quote inked on the inside of his left bicep. Not only that, but Liam’s arm tattoo is actually a continuation of the quote that Miley got inked on her left forearm back in July – an excerpt from the speech given by Teddy Roosevelt at the Sorbonne in Paris, France in 1910. Many of Miley Cyrus’ tattoos appear to be inspired by the love of her life, whom she has been dating for three years and was recently engaged to, and now Liam has two tattoos clearly influenced by Miley. That’s solidarity if we’ve ever seen it.

Miley’s Roosevelt quote tat reads, “So that his place shall never be with those cold and timid souls who neither know victory nor defeat.” Liam apparently jumped on board with Miley’s arm tattoo, and got another portion of the same speech inked on his arm, reading, “If he fails, at least fails while daring greatly.” Liam Hemsworth seems to be super proud of his new ink, posting a picture of the tattoo on Instagram on October 10, along with the message: “Check out my tat (; @92mrc.” Liam’s arm tattoo is cool and all, and it’s cute that the couple has matching ink, but unfortunately for Liam, is appears that the tattoo artist missed an important word while inked his arm tattoo. Instead of saying, “If he fails, at least he fails while daring greatly,” which is how the speech actually reads, Liam’s tat is missing the second “he.” Doh! 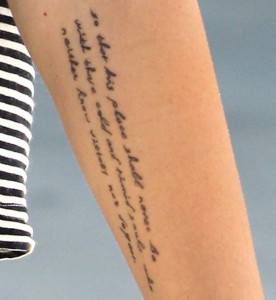 Taking into consideration Miley Cyrus’ other tattoos, everyone was pretty surprised when the 19-year-old showed up with such an inspirational and political quote on her arm. In it’s entirety, the most well-known segment of Roosevelt’s uplifting “Citizenship in a Republic” speech reads as follows:

The credit belongs to the man who is actually in the arena, whose face is marred by dust and sweat and blood, who strives valiantly, who errs and comes up short again and again, because there is no effort without error or shortcoming, but who knows the great enthusiasms, the great devotions, who spends himself for a worthy cause; who, at the best, knows, in the end, the triumph of high achievement, and who, at the worst, if he fails, at least he fails while daring greatly, so that his place shall never be with those cold and timid souls who knew neither victory nor defeat.

So, as you can see, Liam’s new tattoo on his arm comes before Miley’s quote tat in the original speech delivered by Teddy Roosevelt. And when put together, Liam Hemsworth and Miley Cyrus’ arm tattoos read like a charm. How cute!