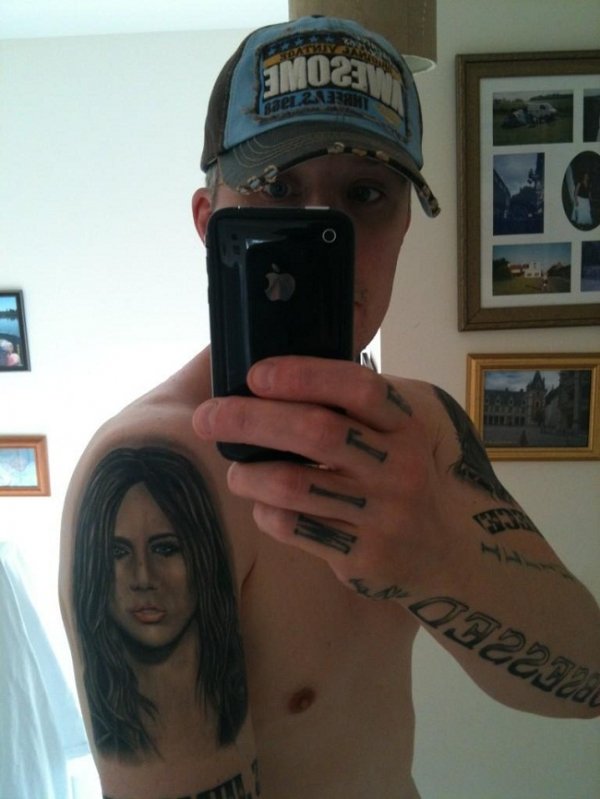 The international web sensation known as the Miley Cyrus fanatic has made headlines yet again, this time for his 17th Miley-inspired tattoo. Opting for yet another portrait of Miley Cyrus, Carl hits up his trusty old tattoo artist for the seventeenth time and walks away with a unique tattoo that has turned out to look like Miley-Cyrus-meets-the-Crypt-Keeper from “Tales of the Crypt.” If you care to witness what can only be described as a grown man’s tragic obsession with a teen pop star, meet Carl McCoid, a near-40 year old man with 17 tattoos of Miley Cyrus covering his body.

Remember the dude (yes, it’s a dude) who became an overnight web sensation because he had an outrageous number of Miley Cyrus-inspired tattoos inked on his body? Well, let’s check back in with that guy, because he just got his 17th Miley Cyrus tattoo…and we’re just plain curious to see whether he has outdone himself this time. Thirty-nine-year-old Carl McCoid of Bridlington, England has a creepy and highly inappropriate obsession with Miley Cyrus, and he chooses to make this known to everyone who isn’t blind by getting obnoxious tattoos of the teen pop star’s face, song titles and even her signature inked all over his body. And since his upper body is already covered with strange Miley-inspired tats, McCoid’s most recent Miley Cyrus tattoo is inked on his leg.

Carl McCoid’s most recent Miley tat is an extremely creepy side profile of the singer that looks more like a stringy-haired witch from a distance than the 19-year-old pop star he obviously adores. The new portrait of Miley is inked on the outside of his right leg, and, like almost all of his other Miley Cyrus tattoos, is inked in black and white. In addition to this new ink, Carl McCoid has 16 other tattoos inspired by the former Disney star, including two other portraits on his upper arms, the letters M-I-L-E-Y and C-Y-R-U-S inked across his knuckles, her signature on the outside of both of his hands, the name “Miley Cyrus” inked across his chest like a necklace, song titles “Liberty Walk,” “Obsessed,” and “Breakout” inked on his forearms, and many, many more. 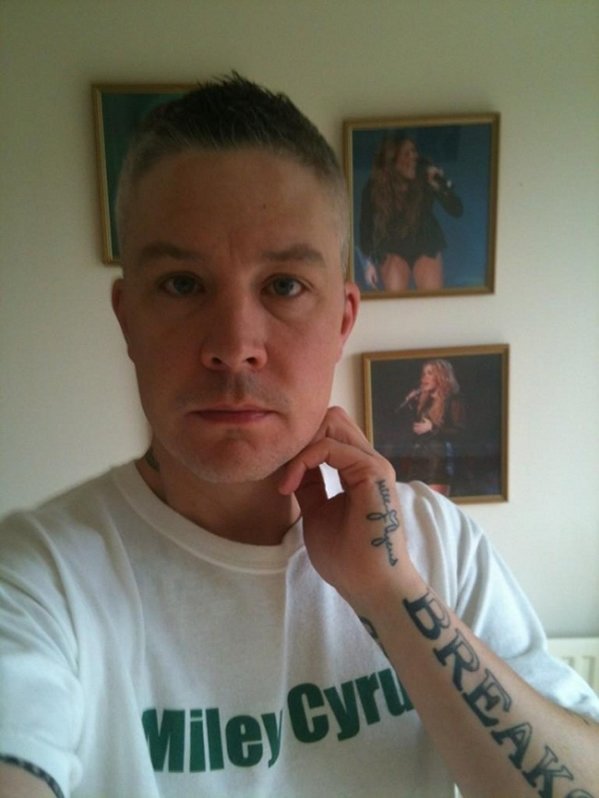 More Tattoos of Miley for Carl?

Despite the fact that Carl’s family and friends have questioned his peculiar and obsessive tattoo collection, the middle-aged British man has vowed to continue inking up his body in honor of Miley Cyrus. “I may as well keep going, what’s stopping me now?” he said recently. “As long as there’s a theme on the go, and now it’s become known, so why stop there?” Um…maybe for the sake of your three children who will most definitely require therapy as they get older. “It’s not a case that I just want a tattoo put anywhere on my body, it has got to be done properly and all the tattoos I have got are all symmetrical so I will probably have to have one done on my other leg to match up with my new tattoo,” Carl said. Maybe his next tat will reflect Miley’s new drastic pixie hairdo!

So who do we have to thank for Carl McCoid’s 17 Miley Cyrus tattoos? All but one of the Miley-inspired tats have been inked by Stuart Rollisson, owner of the Black Lantern tattoo studio in Bridlington. Apparently Rollisson has been inking tats for nine years, which clearly isn’t enough time, because the three portraits on Carl’s body are a far cry from resembling the pretty 19-year-old singer’s face. In one portrait tat on Carl’s arm, Miley is sporting a serious trout pout, and in the other she just looks plain old confused. As far as the new leg tattoo goes…super-ultra-creepy. 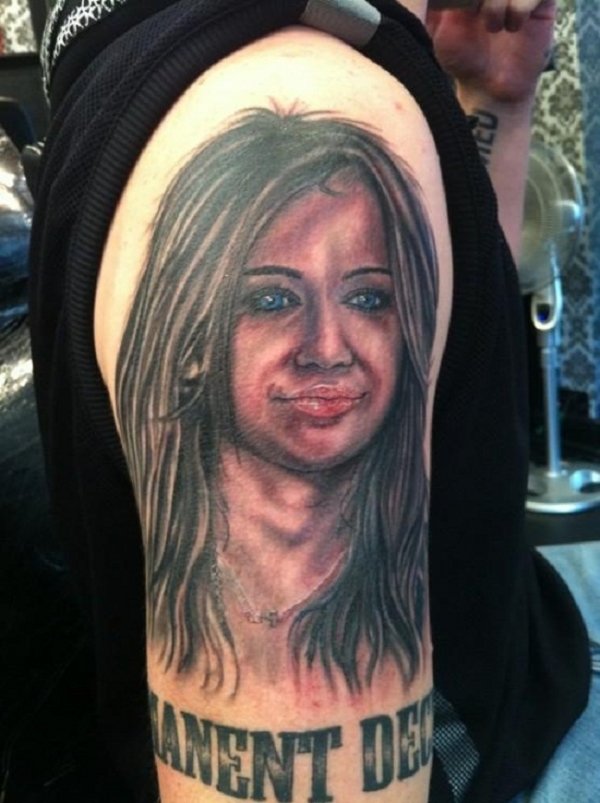 So what did Rollisson think when Carl McCoid showed up in his shop looking to add to his Miley Cyrus body collage? “I wasn’t surprised to be fair because it’s Carl, he isn’t a surprise anymore,” said Rollisson when asked about his famous customer. “I think if there was a line with Miley Cyrus it’s been crossed.” We’d like to second that.