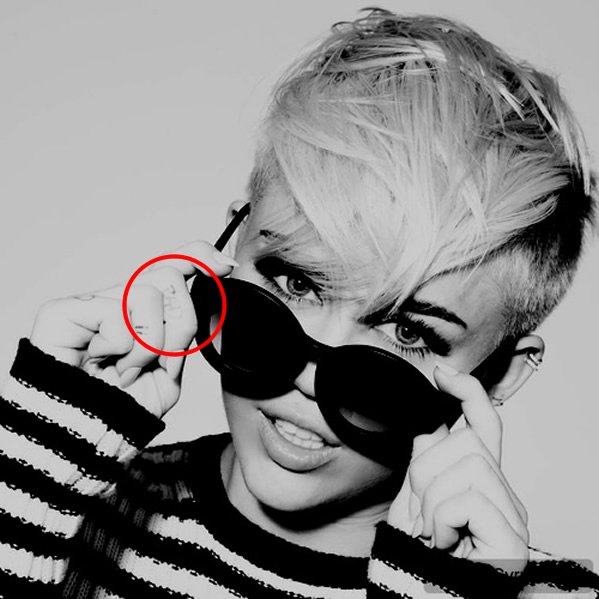 While we were all busy gossiping about Miley Cyrus’ Roosevelt quote tattoo on her arm, the 19-year-old singer debuted a tiny “BAD” tattoo on the outside of her right-hand middle finger. While the “BAD” may come in handy when flipping someone the bird, the inspiration behind Miley’s new tat was more likely drawn from an international music icon. Check out pictures of the teen star’s inspired new ink and tell us what you think about Miley’s little-known “BAD” finger tattoo.

We all know that Miley Cyrus is desperately trying to shed her good-girl image in favor of a more controversial, grown-up persona, but the singer now has her adult desire in writing. In July 2012, she was photographed with the word “BAD” inked on her finger in what seems to be a sneaky new red tattoo, joining fifteen other tats on various parts of her body. While it wasn’t confirmed that Miley’s new red ink is real, recent photos of the singer posted online still show the tell-tale red “BAD,” which leads us to believe to ink is a genuine tattoo. Plus, it only takes one look at the rest of her inked-up fingers to make an educated guess that the singer may have hit the tattoo parlor yet again, although the meaning of the ink may not be exactly what you would think.

Yes, it’s true that Miley Cyrus is trying to cultivate her new, post-Hannah Montana image (think nude bathtub pictures, shaved haircut and numerous tattoos), but it’s also true that a huge inspiration for the singer’s blossoming musical career was Michael Jackson. In the past, Miley has described herself as “a huge fan of Michael Jackson,” claiming that MJ is the male artist that she drew the most inspiration from in regards to her own music. Michael Jackson’s seventh studio album was called “BAD,” and the word was written in red on the his album cover. When the king of pop tragically passed away in 2009, Miley had this to say: “Michael Jackson was my inspiration. Love and blessings.” Miley Cyrus has many tattoos inked on her body, but it seems like the most important ones are inked on her fingers. By adding a “BAD” tat to her collection of finger tattoos, we all get a glimpse of how meaningful MJ and his music were for Miley.

Comparing Herself to Michael Jackson

In addition to idolizing Michael Jackson, Miley also sympathizes with his struggles regarding the music industry and pressures from the media, beginning at such a young age. In a 2010 interview, she told MTV:

Miley Cyrus’ tattoos are the talk of the town, and it’s rare that even one should sneak by those paparazzi hounds. One of her most recent tats – a quote from Theodore Roosevelt inked on her arm – has drawn significant media attention since the singer debuted the ink in July 2012. But while everyone was focused on the inspirational presidential quote, Miley very subtly sported a new “BAD” tattoo on her finger without anyone noticing! In addition to her new “BAD” tattoo, the singer/actress has 15 other tats inked on her fingers, ribs, wrist, ankle, arm, and even inside her ear. Miley seems to enjoy getting a new tattoo without speaking about it in public (it took three months for anyone to notice the “LOVE” tat inside her ear), so we can’t wait for everyone else to catch up to this new “BAD” finger tat!