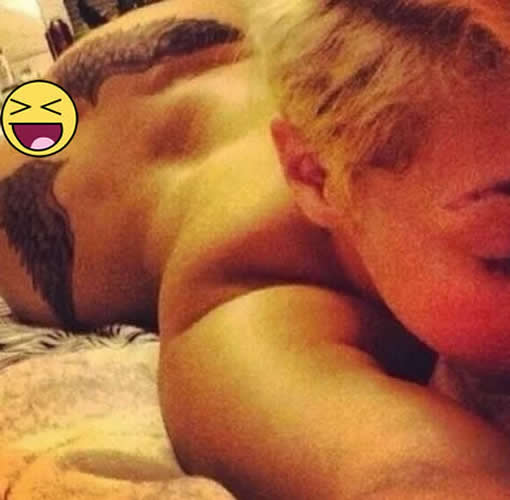 Miley Cyrus (or at least someone posing as her) sparked some serious rumors on June 12, when a risqué picture popped up on Twitter of a chick with a platinum blonde pixie ‘do sporting a huge butt tattoo of angel wings. The photo makes it pretty difficult to tell who the person is, since the face is all but hidden, but it looks an awful lot like Miley and we all know she has a tattoo obsession. Miley Cyrus, of course, denies the butt tattoo rumors, but we’re not so sure. The tagline on Miley’s Twitter account does say “im a dime. best top of the line. cute face slim waist with a BIG behind,” and the pop star is famous for “accidentally” leaking racy photos of herself and her tattoos online. Steamy bathtub shot, anyone? So what do you all think; is the angel wings butt tattoo Miley’s or not?  She says nope.

Miley Says She’s “Not THAT Rachet”

The tattoo in question is a pretty large black and white piece featuring two angel wings – one on each butt cheek of a girl with a shaved blonde hairstyle, just like Miley’s. In fact, the artwork looks suspiciously like the giant wings tattoo that Miley Cyrus’ mom, Tish, has inked across her entire back. Maybe Miley was going for a mother/daughter thing? Once the but tattoo rumor started circulating the Internet though, the pop star herself set the record straight, writing on Twitter, “I did NOT get a tattoo of wings on my a** hahaha,” followed by another post that read simply, “#notTHATrachet.” Apparently Miley has limits, although the singer is constantly posting near-naked photos of herself and her many tattoos online, so we really wouldn’t be surprised.

Is the Butt Tattoo Pic a Publicity Stunt?

The reason she is so adamant about putting a stop to the Miley Cyrus tattoo rumors is that she apparently wants people to start concentrating on her music instead of on her relationship with Liam Hemsworth and other aspects of her personal life, like her new tattoos. With three albums under her belt and another set to be released this year, it’s possible that Miley is trying to draw attention to herself with the butt tattoo picture, not especially caring what kind of attention that is. We’re reminded of the recent publicity stunt that involved Justin Bieber “leaking” pics of himself in the buff leading up to the release of his “Beauty and a Beat” collaboration with Nicki Minaj. In fact, Miley Cyrus did just debut her new track “We Can’t Stop.” Maybe she just “can’t stop” getting inked!