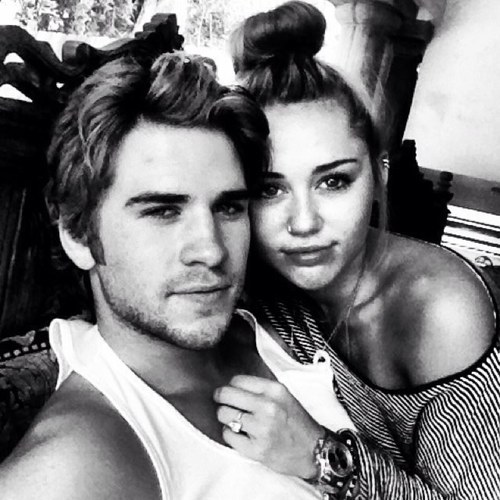 As Miley and Liam just start getting used to their brand-new engagement, the couple is already talking babies! If the 19- and 22-year-old want to start a family, that’s all well and good, but we’re concerned about Miley Cyrus’ tattoos! Has the former Disney star and popular singer thought about what a pregnancy could do to her many body tats, especially her dreamcatcher and “Just Breathe” ribcage tattoos? Miley’s numerous finger tattoos are probably safe, but what about that ankle tat and the scrawling Roosevelt quote tattoo Miley Cyrus just got on her arm? A pregnancy could present a problem!

Miley Cyrus recently debuted a new tattoo and a new edgy, blonde hairstyle, but there’s another new addition Miley hopes to welcome into her life soon – a baby! Despite the fact that they’re only 19 and 22 – and despite the fact that they haven’t even gotten to the altar yet – Miley and fiancée Liam Hemsworth are apparently hoping for a baby as soon as possible. We’re in no place to judge the young couple’s ability to raise a child when they are basically children themselves, so we’re going to stay mum about the future celebrity mommy and daddy. Our only question is, what will a pregnancy do to all Miley Cyrus’ tattoos?

Miley and Liam have been dating since they met on the set of “The Last Song” in 2009, and the couple just announced their engagement in June 2012. Although Miley and Liam haven’t set a wedding date yet, the duo is already planning on adding a little one to their hectic lives. Friends of the couple don’t seem to be too concerned about the possibility of a little Miley or little Liam though. “Miley and Liam really want to have a baby quickly,” says a source close to the couple. “They are both mature and ready for this. Miley is 19 going on 40.” Mature seems to be used rather loosely in this case, since it seems like just yesterday Miley was photographed licking the penis cake she got Liam for his birthday.

Miley Cyrus Tattoos Could Be Ruined by Pregnancy

Miley Cyrus makes headlines quite a bit these days, most recently because of her new tattoo – an inspirational quote taken from a 1910 speech delivered by former U.S. president Theodore Roosevelt. Miley Cyrus’ Roosevelt quote tattoo is inked on the inside of her left arm and drew quite a bit of attention, especially when it was discovered that the quote was also used by convicted sex offender Jerry Sandusky in a letter to one of his victims. Cringe. But the arm tat isn’t the only ink Miley Cyrus has. The singer/actress has 14 others in fact, including a large dreamcatcher tat on her right side and “Just Breathe” inked below her left breast, both of which could suffer serious stretching during a pregnancy. Watch out Miley, or you could be hitting the tattoo removal clinic yet again!