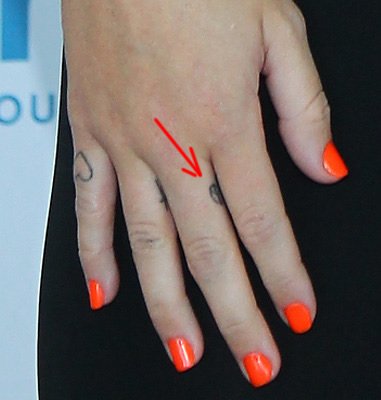 Miley’s peace sign tattoo is inked on the side of the middle finger on her right hand, right next to her cross tattoo and heart finger tat. Pictures of the peace tattoo on Miley’s finger surfaced in May 2011, although no one is entirely sure when the pop star actually got the peace sign inked. Miley is known for secretively getting inked up and also for not talking about her tattoos in public, although we’re not sure why. For example, Miley Cyrus’ got a tattoo reading “love” inside her ear in 2010, but it was months before anyone noticed the ink and started calling the tattoo “new.” As Miley retorted, “Everyone is a little behind the times,” referring to the love tattoo. You’d think she would be happy that the paparazzi weren’t all up in her ears taking pictures!

As we said earlier, Miley isn’t one for talking about her tattoos in public. The only ones she has really mentioned are the equal sign tat via Twitter and the “love” tattoo in an interview. However, Miley has reportedly said, “I could never get a meaningless tattoo,” which means we can safely assume that Miley’s peace sign tattoo means something important to the star. Since the teen star has recently vocalized her support of gay marriage and LGBT rights, it’s likely that her finger tattoo is a symbol of her desire for everyone in the world to be seen as equals despite their differences. In fact, just a few months after the peace sign was inked on her finger, Miley Cyrus got a tattoo of an equal sign, also inked on her finger. Miley posted the equal sign pic on Twitter along with the message “ALL LOVE is equal.” 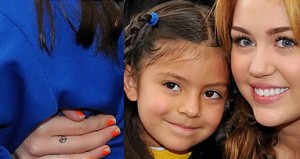 Miley has also posted responses to fans advocating equality and equal rights, including one post that read, “Where does it say in the bible to judge others? Oh right. It doesn’t. GOD is the only judge honey. GOD is love.” Friends of the star have noted that all of Miley Cyrus’ tattoos are inked in honor of friends and family, and they all mean a lot to the teen sensation. We can only guess that Miley Cyrus’ tattoo on her finger represents the importance of seeking peace in the world.

It seems like Miley tries to make getting a tattoo a pretty private occasion (except for the pictures taken), and certainly doesn’t participate in any grand, dramatic tattoo reveal like some other mega-stars do (ahem, Lady Gaga). Which is weird, since Miley has been criticized lately for making other parts of her life a little too public (penis cake, anyone?). Miley’s peace sign finger tattoo, for example, sort of appeared out of nowhere. Back in late 2012/early 2011, pictures of the singer’s tattoo actually showed a single line inked on Miley’s middle finger. Somewhere shortly thereafter, the line became the peace sign tat. Other pictures of Miley Cyrus show the star giving the peace sign, like the photo of her snapped in L.A. shortly after getting her dream catcher tattoo inked on her side. It seems that everything with Miley is peace, love and equality!