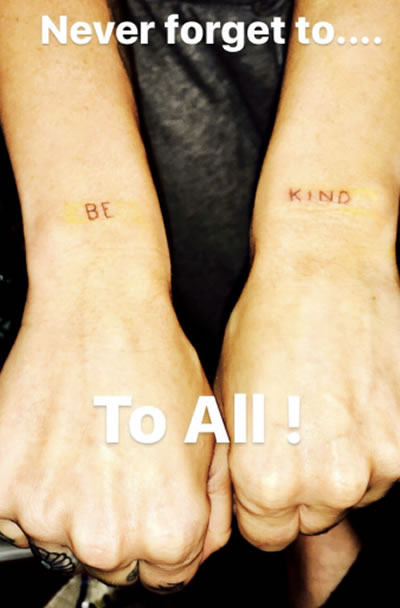 After tricking the world into thinking she was pregnant by showing off her “tofurkey baby” belly over the holiday weekend, Miley Cyrus revealed a couple of new vegan-inspired tattoos on her arms. Miley Cyrus’ latest tattoo addition features the words “BE KIND” inked in capital letters on the tops of her wrists, a belated birthday present to herself and a reminder of what a passionate animal activist she is these days. Miley officially went vegan in 2014, after her beloved Alaskan Klee Kai Floyd was killed by a coyote, and she has been vocal over the years about the benefits of vegan living, advocating her ethical lifestyle to her social media followers and getting permanent tattoos to prove her dedication to veganism.

This latest Miley Cyrus tattoo was done in the pop star’s own bedroom over the weekend, by Miley’s friend and tattoo artist Dakota Gomez, and the 25-year-old returned the favor by giving Dakota a tattoo of his own, working on his left forearm while he calmly played on his phone, according to her Instagram Stories posts. Miley Cyrus shared a photo of her new arm ink on her Instagram account, reminding us all that we should “Never forget to… ‘BE KIND’ To All!” She also posted photos of herself inking Dakota Gomez, writing “Watchout Kat Von D,” presumably hinting at inking abilities that rival those of the renowned tattoo artist and fellow vegan. 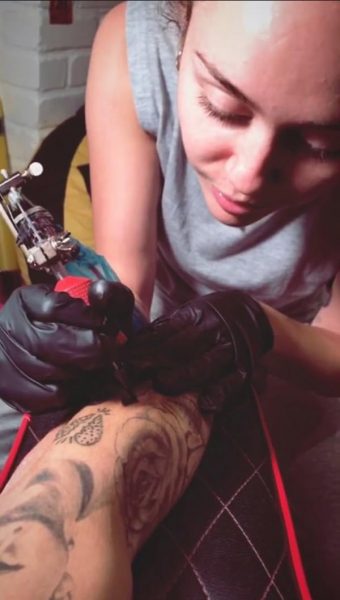 Miley got her first vegan-themed tattoo earlier this year, marking her upper arm with The Vegan Society Approved logo and captioning the shot on Instagram, “Vegan for life!” This new ink on her wrists promotes a similar message, that needlessly killing poor, defenseless animals is not something she’s into. Miley posted a photo with a similar message on Instagram over the weekend, quoting Buddha: “All beings tremble before violence. All love life. All fear death. See yourself in others. Then whom can you hurt? What harm can you do?” She accompanied the quote with a photo of a variety of vegetarian Thanksgiving dinner options, along with the caption, “In case any last minute conscience kicks in! Here’s some awesome Vegan Turkey day options.” 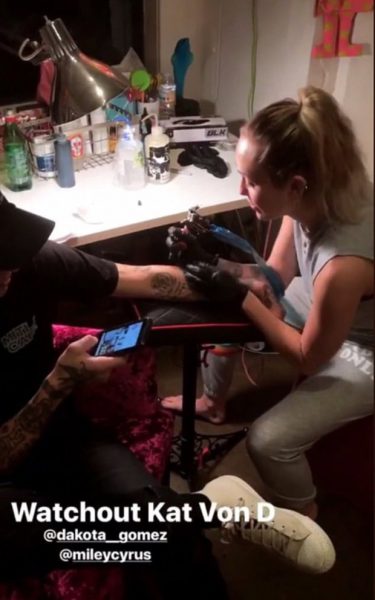 Miley Cyrus’ “BE KIND” wrist tattoos come amid speculation that the pop star and fiancé Liam Hemsworth are expecting a child together, after Miley showed off what appeared to be a baby bump over the weekend, though the 25-year-old quickly put that rumor to rest, revealing that her “bump” was simply the result of “eating a sh*t ton of tofurkey.” Miley Cyrus’ new tattoo is an example of the animal-friendly lifestyle she’s living these days, and serves as a reminder to us all to show everyone a little kindness this holiday season.