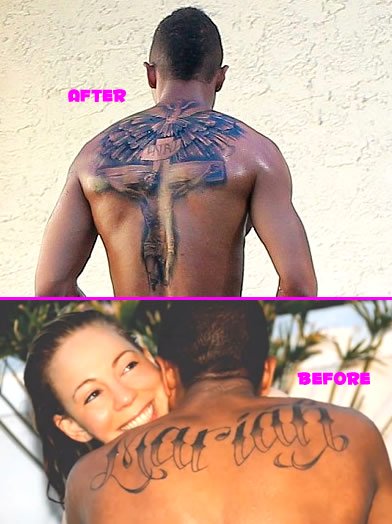 **Update: Nick Cannon has since spoken in public about his tattoo cover-up admitting that he was “upset” that his new back tattoo made headlines before it was complete. According to Nick, he is planning a full back tattoo that will take over 40 hours, as well as a full sleeve. Stay tuned to get the inside scoop on Nick Cannon’s tattoo!

Boy, did we call it! A little over a month after going public with his and Mariah Carey’s plans to divorce, Nick Cannon went under the needle for some new ink to cover up the gigantic “Mariah” tattoo he had inked on his back shortly before marrying his now-estranged wife. Nick showed off his revamped back tattoo while celebrating his upcoming 34th birthday with friends at Playhouse night club in Hollywood last week, taking off his shirt while performing a DJ set to reveal the large cross tattoo covering his back. According to sources, the ink features an elaborate image of Jesus on the cross with angel wings coming off the end of the crucifix.

Nick Cannon and Mariah Carey initially met in 2005, when Nick presented the diva with the Choice Music R&B Artist award at the Teen Choice Awards. It wasn’t until 2008 that the couple went public with their relationship though, and with no prior announcement, Nick and Mariah were married in a ceremony on April 30, at Mariah’s private estate on Windermere Island in the Bahamas. Six years and two children later, divorce is on the horizon for the “America’s Got Talent” host and his pop star wife, and Nick was obviously eager to separate himself from a constant reminder of his soon-to-be ex-wife, which he accomplished with a new back tattoo.

Nick Cannon and Mariah Carey’s failed marriage is yet another example of why Hollywood couples should avoid relationship tattoos at all cost. “To me, rings are special and exciting, but tattoos mean more than anything. They’re forever and ever. They professed our love,” Nick Cannon said about his and Mariah’s now-meaningless marriage tattoos. As Nick Cannon has proven though, relationship tattoos don’t have to be forever…as long as you know a good cover-up tattoo artist.

There’s no word yet what caused Nick and Mariah to separate back in May, but one source says Mariah’s jealousy was the root of their problems. “Nick’s phone would blow up from Mariah texting and calling, and he would turn it off. He was tremendously embarrased by it,” said the source. “Nick told friends that Mariah would get angry when he wouldn’t return calls, and sent assistants to see what he was doing. He was tired of having to answer to Mariah all the time. It was just sad to see, because Nick always used to brag about how amazing his wife was to everyone on the set.”

Nick obviously doesn’t think his estranged wife is all that amazing anymore, judging by his brand-new “Mariah” tattoo cover-up. We have to admit though, it was a good move replacing his relationship tattoo with an image of Jesus, because there ain’t no breaking up with Jesus, right?? No word yet on whether Mariah Carey plans to remove or cover up the tattoo she got in 2008, which reads “MC” with a butterfly. The ink was supposed to stand for Mrs. Cannon, but as Ellen DeGeneres pointed out in an interview back in 2008, the tattoo could just as easily be her own initials in case the marriage didn’t work out. How convenient!