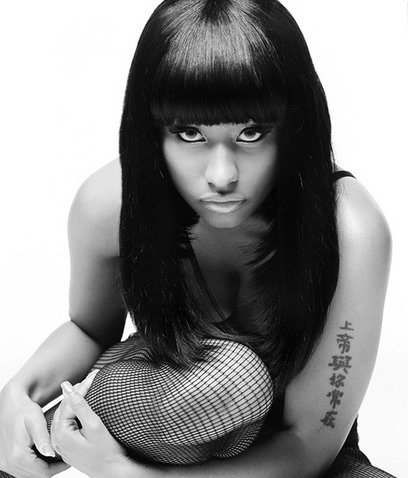 Back when she was 16, Nicki Minaj got a very visible Chinese characters tattoo on her arm, and she says now that she regrets the ink, for more than one reason. Although Ms. Minaj hardly seems like the religious type, her first-ever tattoo is a nod to her religious roots, which she may or may not still consider an important part of her life. Nicki’s tat is inked in black on the upper part of her left arm and features a series of six Chinese hanzi characters that read phonetically as, “Shàngdì yŭ nĭ cháng zài.” Nicki Minaj’s arm tattoo translates to “God is always with me” or “God is with me always,” depending on who you ask. Despite the admirable meaning of Nicki Minaj’s tattoo, the pop star regrets the ink – particularly its location – and says she was young and foolish for getting it. “Way too young. You have no idea what you want to put on your body at the age of 16,” Nicki said in a recent interview. “You need to wait until at least 21 and decide.”

Nicki Minaj, born Onika Tanya Maraj, is originally from Saint James, Trinidad and Tobago, where she lived before moving to Queens, New York at the age of five. It was in New York where Ms. Minaj was eventually discovered by rapper Lil Wayne, and she now enjoys international success under the stage name “Nicki Minaj,” which is believed to be one of the alter-egos the pop star made up during her difficult childhood. Nicki’s parents are of mixed Indian and Afro-Trinidadian ancestry, and Nicki herself has South-Asian ties and is ¼ Indian. During a Desihits.com interview with “Arun and Doctor P,” Arun mentions to the pop star that even her nickname “Nicki” is Indian, meaning “little.” Nicki goes on to say, “My real last name is Maraj, and that means ‘king’…so Little King!” That Asian ancestry is likely one of the main reasons Nicki Minaj opted for a Chinese tattoo in the first place. 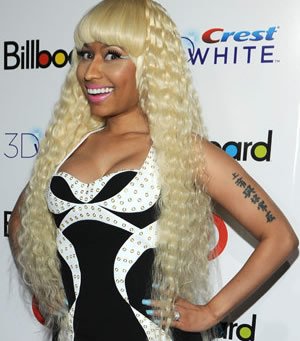 According to Nicki’s account of the tattoo session, she was originally going to get one or more Chinese characters inked on the back of her neck, but apparently her pain threshold just wasn’t high enough. She asked the tattoo artist to empty the ink out of the needle and test it out on the back of her neck just to see what the pain was going to be like. “When he put that needle like on that bone, I was like ‘never.’” So, since Nicki Minaj had already paid for the tattoo, she ended up getting the Chinese tattoo inked on her left arm instead. Now, Nicki Minaj may seem like the type who answers to no one, but you’ll never guess what kind of reaction she got from her mother when she came home with a tattoo at 16 years old! “I was thinking, how am I going to explain this to my mother? At that time I had a tongue ring, and she told me ‘I’m disowning you,’” Minaj confessed during a 2010 interview. “Like when she saw the tattoo and the tongue ring, she was like, ‘I am disowning you.’ I was bummed out that I went and got the tattoo.”