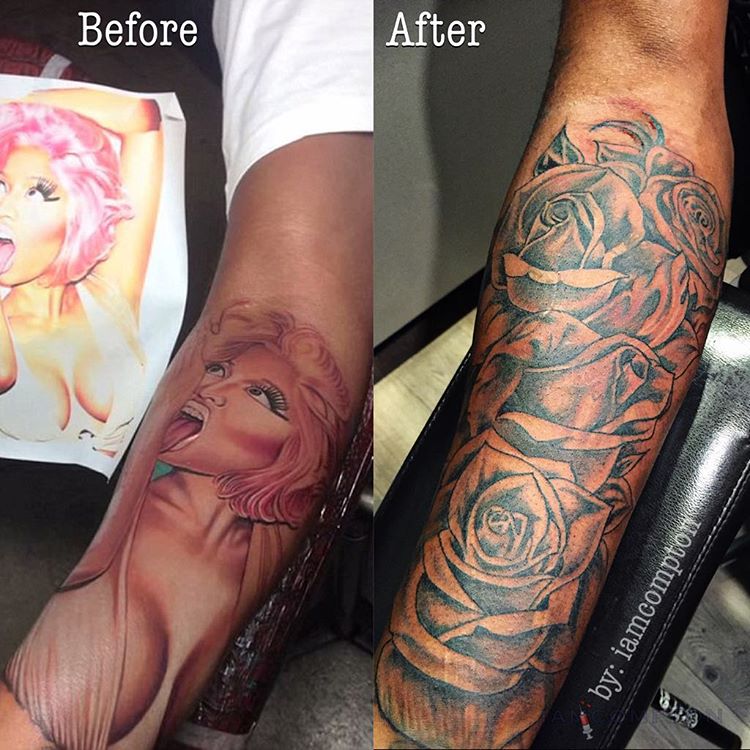 The creepy portrait tattoo Safaree Samuels got back in 2013 of Nicki Minaj licking her own forearm was weird enough when the two were dating, but since the couple called it quits last year, the bizarre ink has been a constant reminder of the failed relationship for the rapper and record producer. Which is why we were glad to find out that old Scaff Beezy finally covered up his Nicki Minaj tattoo this week, trading in his ex-girlfriend’s face for a collection of black and gray rose blossoms on his arm.

It was back in October 2014 that Safaree Samuels began methodically covering up the tattoos he had gotten in honor of former-girlfriend Nicki Minaj, including the portrait tat of a black-wigged Nicki on the right side of his chest, and the “Nicki” tattoo with stars on the left side of his chest. Shortly thereafter, Safaree was spotted out and about with what appeared to be a significantly diminished tattoo of Nicki wearing a bubble gum pink wig on his arm, and now the rapper’s face is completely covered up by a bed of roses.

Safaree Samuels’ tattoo artist, who goes by the name iAmCompton, shared a “before” and “after” photo of the rapper’s arm tattoo cover-up on Instagram on September 2, captioning the pic, “and u think yo job is hard. Just finish this piece for @iamsafaree #SorryNicki #itsJustBusiness #InkArtMusic.” We’re not sure why Safaree waited close to a year after getting his two Nicki Minaj chest tattoos covered up to transform the tribute tat on his arm, but perhaps he was holding out hope he and Nicki would reconcile. Oh well, as Compton put it, #itsJustBusiness.