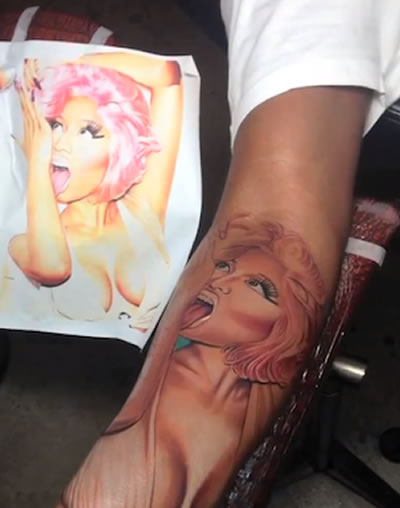 Assistant, best friend, brother, sidekick, boyfriend, fiancé…no one is really sure what Scaff Beezy’s official connection to Nicki Minaj is, but it’s got to be something pretty serious because the rapper has just had a large portrait of the singer inked on his arm. Scaff Beezy, also known as Safaree Lloyd Samuels, SB and VVS Beezy, hit up Artistic Element Tattoo in Los Angeles on November 25, and had a weird and incredibly painful-looking Nicki Minaj tattoo inked on his right forearm. The arm tattoo, which took a whopping eight hours and STILL isn’t finished, matches the Bob Marley tattoo Scaff has inked in the same spot on his left forearm.

From what we could tell, the tattoo artist did a pretty good job on Scaff Beezy’s tattoo. The image the rapper chose to use for his portrait tattoo, however, is a little questionable. It shows the profile of Nicki Minaj in a bubble gum pink wig, low-cut top and signature makeup, with her hands over her head and the pop star licking her right arm. Yes, licking her arm, Miley Cyrus-style. Unlike the Bob Marley tattoo Scaff sports on his left arm, which is black and white, Scaff opted for a full color tat this time, presumably to match Nicki’s vibrant personality.

Wondering why Scaff Beezy chose to get Nicki Minaj inked on his arm? “You know a lot of people out there, they go out and tattoo people that they don’t know,” Scaff said during the tattoo session. “Why not tattoo somebody that I know, you know?” 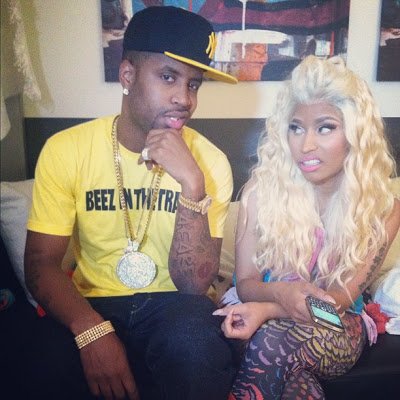 Makes sense. After sitting in the hot seat for eight hours, Scaff was probably hoping to show off his completed tattoo, but his arm was too swollen to continue, so he’ll have to head back to Artistic Element Tattoo another day for another 4-5 hour session. Ouch! We sure hope Miss Minaj is worth all that pain, because when he mentioned his other portrait tattoo, Scaff said, “Bob Marley…I don’t know what I was thinking.” Hopefully he doesn’t feel that way about his Nicki Minaj tattoo in a few years!