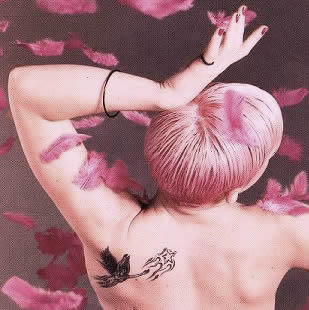 Pink is one of those women that we typically view as being tough as nails, which is why it may seem strange to find out that she has certain, uncharacteristically sentimental tattoos, including her first back tattoo – the guardian angel chasing a shooting star. Even Pink’s back tattoo has a rebellious story behind it though, since she was still underage when she got the guardian angel inked on her back. As Pink has admitted in interviews, “I think part of me did it because it was illegal and it would piss my parents off.” That’s more like the Pink we know and love! And although Pink has remarked that she would never (ever!) get her tattoos removed, she has mentioned that she wishes she would had gotten just one big back tattoo and called it quits. “I can explain every single one of ’em and have a good laugh,” Pink says of her back tat and other tattoos. “But if I could start over, I’d do just one big back piece and have a clean [front]. I’m into balance.”

Pink’s first tattoo was the Japanese kanji symbol for “good luck and happiness” that she got inked on her left foot, followed closely by the guardian angel tattoo she has inked on her back. Pink’s guardian angel tat is relatively large, and is located on the upper left-hand side of her back, near her shoulder. Pink’s back tattoo is black and white and features a guardian angel chasing after a shooting star that is just out of reach. Pink got her guardian angel back tattoo when she was only 15 years old, during a very dark and difficult time in her life. Talking about the design of her back tattoo Pink says, “I felt like I was the shooting star and I needed help.” Growing up, Pink’s father was Catholic, and in Catholicism, guardian angels are believed to be spiritual beings assigned to protect and care for people on earth. The being in Pink’s back tattoo is also the angel she addresses in her soul-baring song “Dear Diary,” from her album M!ssundaztood. Pink hasn’t talked about who the guardian angel in her back tattoo actually represents, but from what she has said, it’s likely that she was just hoping anyone at all would be able to help her.