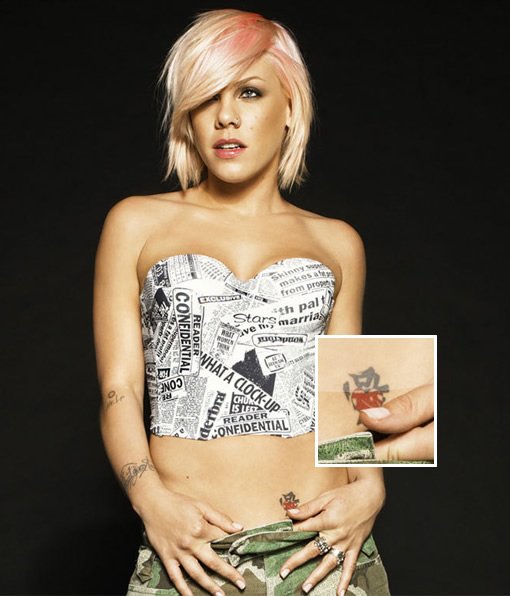 Although Pink’s arms and legs have gotten most of the attention in the tattoo department, Pink also sports tats on her hip, neck and back, and they are equally as important to the pop star. In fact, it seems like Pink’s arms and legs may already have all the tattoos they can handle, whereas she has plenty more room for back, stomach and hip tattoos. Pink’s tattoo collection has been gradually growing since she was 12, and her hip tattoos and other tats really do represent certain times in her life that she considers to be extremely important. Despite the fact that Pink has probably changed quite a bit since the age of 12, 15 and 17, when she got her first tats, she never plans on getting her hip tattoo or any of her other tats removed. As Pink herself said, “I don’t regret any of mine because they all represent a chapter in my life and that’s what tattoos are for.”

One of the many heart tattoos Pink has includes the Japanese kanji symbol for “love” with a red heart in front of it, inked on the lower part of the pop star’s left hip. Pink has talked extensively about her love for Japanese art and kanji tattoos – which she has inked on various parts of her body – attributing her admiration for Japanese designs to her parents, who owned a number of Japanese items during the pop star’s childhood. Pink’s very first tattoo was the Japanese kanji symbol for “good luck and happiness,” which she had inked on her foot at 12, knowing it would make her parents angry. Since then, Pink’s tattoos have gradually covered her body, including her “love” hip tattoo and several other Japanese kanji symbols. Unlike a number of other celebrities with Japanese tattoos though, Pink is pretty sure the meaning of her hip tattoo (and all her Japanese symbols) are correct. “I’ve checked them and checked them and checked them,” the pop star said of her hip tattoo and other foreign tats. “My friend has big ones on her arm that mean ‘cleansing.’ She had her arm out the window and this Japanese woman yelled over ‘Tampon! You have tampon on your arm!’ She yelled back, ‘It’s cleansing!’ ‘Yeah. Feminine cleansing. Tampon.’ She’s like…great.”