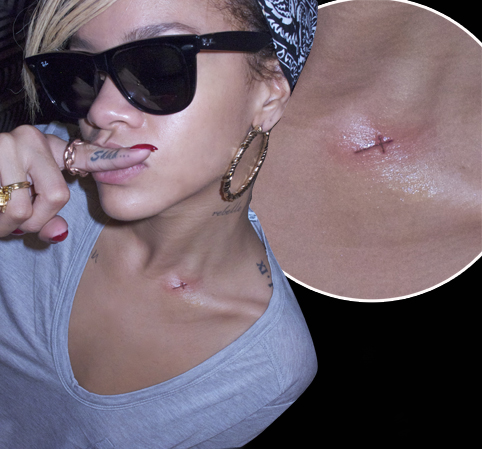 You know RiRi can’t stay out of the spotlight for too long! Less than two months after getting her Tupac-inspired “thug life” tattoo inked across her knuckles, Rihanna has gone and done it again, this time with the help of renowned tattoo artist, Bang Bang McCurdy. That’s right, Rihanna got a new tattoo of a cross inked on her left collarbone, and pictures of the singer’s new ink cropped up on Twitter just today, March 17, 2012, for us all to see. But wait a sec, how come almost all of the tattoo pics are in black and white? Could it be because Rihanna’s cross tattoo is actually inked in red and she wanted to ward off criticism for what has been called her act of godlessness? Oh boy, she’s dug herself deep this time.

At first glance, Rihanna’s new tattoo looks like a simple and discreet black cross inked on her collarbone, right near her “rebelle fleur” neck tat and her Roman numeral shoulder tattoo. Take a closer look though; the pop star’s cross tattoo isn’t inked in the traditional vertical position, which is a symbol Christianity and other religions use to represent their faith. Nope, Rihanna’s cross tattoo is slightly slanted to the right and color photos show the cross is actually inked in red. As a result of this simple design choice, critics have slammed RiRi for deliberately adopting the cross from the ancient Freemasons. Apparently, critics believe the superstar’s cross tattoo is actually a representation of her godlessness and her ties to the Illuminati, an elitist group believed to possess more control over society than the world’s most powerful political leaders.

Rihanna’s Loves Her Some Religious Tats 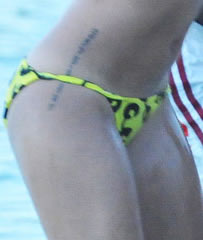 Hold up. If Rihanna is so anti-religion, how come she has two other religious tattoos inked on her body? In 2007, the songstress got a Sanskrit prayer tattoo inked on her right hip, extending from her waist to just above her butt. Also inked by tattoo artist Bang Bang, RiRi’s Sanskrit tat was meant to read “forgiveness, honesty, suppression and control” from the Sanatana Dharma (a holy Hindu scripture) Bhagavad Gita 10.4-5. Even though Rihanna’s hip tattoo was supposedly misinterpreted, it still has significant religious connotations, right? Then, in 2008, Rihanna opted for another religious tattoo, this time getting “Al-Hurria fi Al-Maseeh” inked on her left ribcage. The pop queen’s Arabic tat means “Freedom in God,” and you really can’t misinterpret that, can you? If all of RiRi’s tattoos spark this much interest/criticism, we hope there are more in the future!