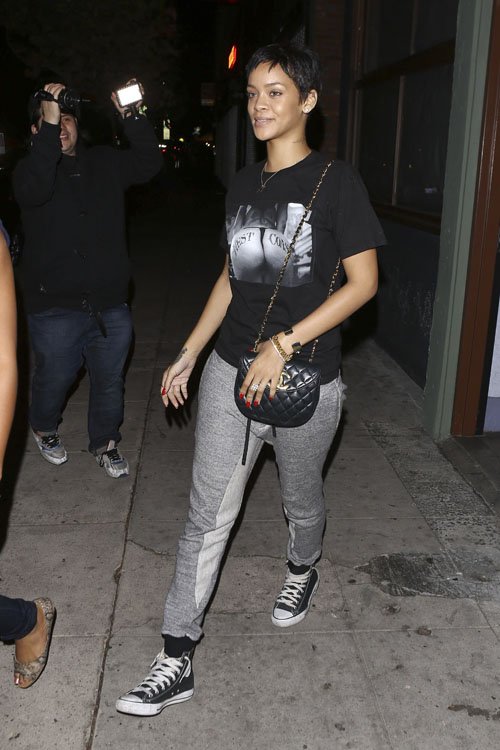 Rihanna is apparently planning a brand new tattoo, possibly one for her back this time. On October 13, 2012, the pop star was spotted leaving a tattoo parlor in Los Angeles, and although there weren’t any visible signs of new ink, it seems like Rihanna’s tattoo may at least be in the planning stages. Barely a month after revealing her large chest tattoo featuring the Egyptian goddess Isis, Rihanna maybe going through with the back tat, we’ve discovered that she is likely to choose something “cute and sexy” – possibly less like the controversial handgun-shaped falcon tat she recently got on her ankle, and more like the girly skull and crossbones she has inked on the back of her leg. Rihanna’s goddess tattoo is by far the pop star’s most prominent tat, so we’re curious to see if she tries to top it with a large back tattoo!

It’s not certain how long she was in the tat parlor, but it seems she was probably just planning the new tattoo, maybe an outline or something.  We have a sneaky suspicion it will be on her back, and probably big!  Except for the trail of stars she has inked on the back of her neck, Rihanna’s back is basically a blank canvas. But probably not for long! According to someone close to Rihanna, the singer has been saying that “she want to get something crazy big on the center of her back but still keep it cute and sexy.” Most of Rihanna’s tattoos are relatively small, but her two most recent tats – the Egyptian falcon on her ankle and the goddess Isis on her chest – have been bigger and far more intricate than her other ink. Based on these two significant tats, it seems like the Bajan beauty is getting more and more comfortable with larger tattoos. Could a bad-ass back tattoo be in her future?

Nearly all of Rihanna’s tattoos have an important meaning to the pop star, and if RiRi does decide to get a new back tattoo, it will surely follow suit. “I don’t know exactly what image or message she getting on her back, but it’s going to mean something important to her,” said someone close to the Barbadian pop star. “She don’t be getting them just to be getting them. All her tats are about her and special to her. Her body is her temple and she thinks it’s a piece of art too.” Many people would probably agree with the idea that Rihanna’s body is a piece of art, given that the 24-year-old already has 19 tattoos on various parts of her body. A new back tat might be a cool addition to her already impressive collection. Check back and we’ll keep you updated on Rihanna’s tattoo plans!