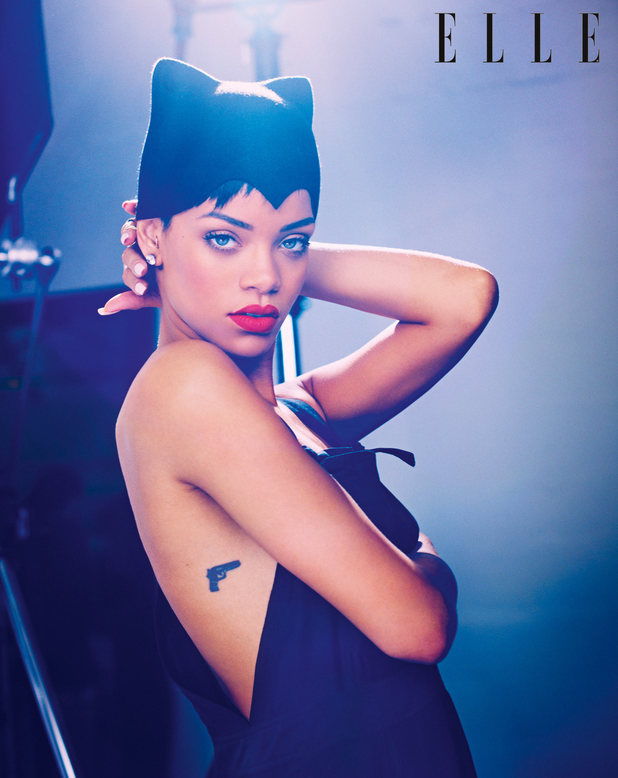 Rihanna spilled the beans during a recent interview for Elle magazine, divulging such secrets as the significance of her tiny gun tattoo and the reason why she got the highly controversial ink. In pics from the Elle photoshoot, Rihanna shows off the tiny gun tattoo that she got inked on her right ribcage just months after being beaten almost beyond recognition by boyfriend Chris Brown on Grammy weekend in 2009. During the candid interview, the always confident singer talks about how she feels like this period in her life is a “fresh start” with Breezy, and that she could see herself having a child in the next five years. She also discusses her response to the assault being so very public, and her newfound feelings of strength and empowerment. Read on to learn more about all this and the meaning behind RiRi’s handgun tattoo!

Because it was inked in the midst of the media rampage that was Chris Brown’s assault on the pop star, Rihanna’s handgun tattoo on her side sparked quite a bit of controversy when she first posted pics of the ink online. People immediately began criticizing Rihanna for her “violence-themed” tat, which they claimed made the uber-talented singer a poor role model for young girls around the world. And as it goes in a media-obsessed world, everyone else pretty much jumped on that bandwagon, despite the fact that RiRi’s tattoo artist (aptly named Keith “Bang Bang” McCurdy) insisted that the ink represented strength and power. Not violence-power, but rather self-control and empowerment.

RiRi’s Ready to Live Her Truth

Now that she and Breezy are officially together, Rihanna feels like she has nothing to hide. “Well I Instagram everything about my life,” she declares in the interview, “whether it’s smoking pot, in a strip club, reading a Bible verse – how crazy, I know! – or hanging out with my best friend, who happens to be Chris [Brown].” There are plenty of people who have a problem with the latter part of that statement, but RiRi has voiced her current desire loud and clear: she wants to live her “truth,” as she calls it, and that’s that. We’ve got to be honest, Rihanna certainly seemed like she was going through a dark time in her life in previous years, but now she is happy, confident and unafraid to live her life exactly how she wants to, regardless of the possible backlash.

Rihanna: “I’ll Never Be a Victim”

Roughly three years after getting the handgun tattooed on her side – in the midst of getting back together with her former abuser – Rihanna revealed in a 2012 interview that she felt relieved about finally being able to tell the truth about the rekindled romance. “It gave me guns,” she said. “I was like ‘Well, f—.’ They know more about me than I want them to know. It’s embarrassing. But that was my opening. That was my liberation.’” In the new Elle interview, Rihanna refers to the months she spent in the public eye following the very public assault. “Everybody wanted to know what was happening in my life. Is she a drug addict? No. Is she an alcoholic? No. Is she a victim? No,” said RiRi in the interview. “That’s when I got the gun. It was a symbol of strength. I’ll never be a victim.” You can’t argue with that!