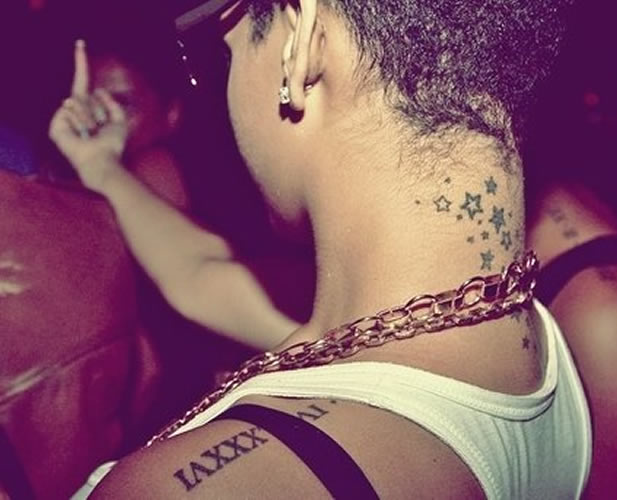 Rihanna is pissed.  At who and why? No idea, but what a great shot of the tattoos on Rihanna’s neck and shoulder in the same frame. She must be in a club somewhere and some douche bag is probably being an ass and Rihanna is showing her appreciation. Hold up…what is the person next to her sporting? A similar shoulder roman numeral tattoo? Could it be?  Hmmm…who dat.

Tattoos in This Pic

In this photo, Rihanna is sporting her Roman numeral tattoo on her shoulder and her string of stars tattoo on the back of her neck. Her tank top really shows of these two tattoos, as she is known to do. Rihanna loves her tattoos, and is never afraid to show them off.

The Roman numeral tattoo on Rihanna’s shoulder was inked in 2008 and represents her best friend and manager Melissa Forde’s birthday – 4/11/1986. To get a friend’s birthday tattooed on your shoulder shows an unparallelled friendship, way beyond just good friends. Someone in this photo has a very similar tattoo standing next to Rihanna. Who in the heck is that?

These stars on Rihanna’s neck were started when she was with Chris Brown, who got a similar tattoo behind his ear. Rihanna’s stars were later added on to and extended from her neck down onto her back and shoulder blade. These stars may have represented the former couples’ “shooting star” dream come true or something mushy like that. Now, they probably have different meaning for the superstar. Perhaps following her own path or direction through the heavens.