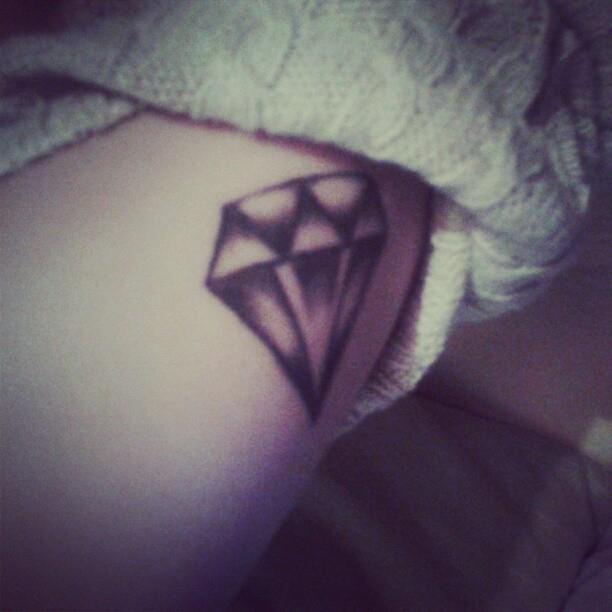 Rihanna has been all over social media lately promoting her new single “Diamond.” From posting images of diamonds rolled in blunts to pics of diamond rings, and possibly even a new tattoo! A pic of a diamond tattoo which appears to be on someone’s left thigh was posted on Instagram & Facebook on Sept 28th.  Is it RiRi’s new tattoo? Hard to tell from the photo if it is our beloved Rihanna or just a pic of someone’s big ole diamond tat. Guess we will wait for the Bad Girl to give it up.

The diamond tattoo picture in question was thrown in with a slew of other diamond-related social media posts promoting her latest single “Diamond,” which is now number 4 in the US charts and selling like hot cakes. Her cute social media pictures and inspirational quotes involving diamonds are surely fueling sales of this single, and the diamond tattoo she posted may just be another cute photo which she thought would be a cool addition to her steadily growing collection of tattoos. BUT… tattoos aligned with albums and singles seems to be the cool thing to do nowadays judging from the “ARTPOP” tattoo Lady Gaga got inked on her arm before her latest album even dropped.

It seems like all pop stars are getting crazy tats recently. Who hasn’t heard about Chris Brown’s neck tattoo which is still being talked about? Lady Gaga got the back of her head / neck tattooed at the launch of her new perfume “FAME,” and oh yeah, Gaga’s neck tattoo was inked LIVE in front of hundreds of people at the Guggenheim Museum in NY while sitting inside of a giant egg. These bold tattoos weren’t song-related, as Rihanna’s new tat might be, but they are certainly newsworthy.

Rihanna’s New Single is Popping Off!

The new single “Diamonds” dropped on Wednesday Sept 26th and was met with shining reviews, quickly jumping to number 4 on the charts. The single will be part of her new album, which may be released in November according to sources, and it may be called “7 Wonders” – but that is just a rumor. Fans and critics alike were dazzled by the latest hit, claiming that Rihanna “shines bright” with her new “Diamonds” single. RiRi is certainly stoked on it, with her Twitter, Facebook and Instagram accounts flooded with promotional quips. Is the diamond tattoo just another pic of someone’s tat or did Rihanna get some new ink? What’s up RiRi???