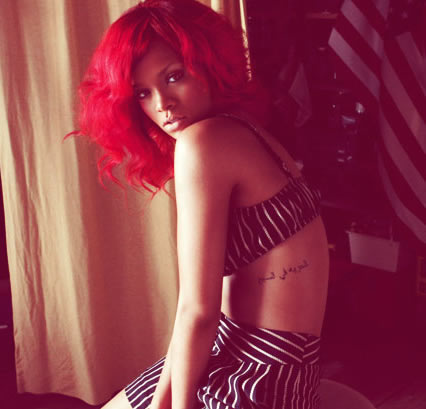 The fifth tattoo Rihanna got inked on her body is an Arabic phrase which reads “Al-Hurria fi Al-Maseeh,” and translates approximately to “Freedom in God.” Some people claim that the literal translation is “Freedom in Christ,” but either way, we get the idea. Rihanna’s childhood wasn’t an easy one, and her tattoos seem to be a way to express the strength, passion and freedom she has found in adulthood. There is some speculation that Rihanna’s side tattoo may be misspelled, similar to the Sanskrit prayer tattoo the Barbados babe had inked on her right hip in 2007. Whether the singer’s Arabic tattoo is spelled incorrectly or not, we’ll probably never know! All Rihanna’s tattoos reflect some aspect of the singer’s character, which the world certainly loves to see!

The Story Behind Rihanna’s Arabic Tattoo

Rihanna’s Arabic tattoo was inked by an unknown tattoo artist in 2008 and is located on her ribcage/side area just below her left breast. True to the traditional Arabic writing practice, the pop star’s Arabic tat is written from right to left. The tattoo itself, however, is very un-traditional, since getting your body inked at all is considered unlawful in the Islam religion. Regardless, Arabic tattoos have become extremely popular among celebrities in the West, including our very own Rihanna, and actress Angelina Jolie. Unfortunately, Arabic tattoos are also commonly misspelled or mistranslated among these same celebrities, due to the intricate nature of the Arabic language. Check out more pictures of Rihanna’s tattoos to see her Arabic tat and many other tattoos.

Meaning of the Arabic Tattoo 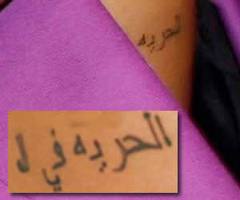 The meaning of this Rihanna tattoo is clearly a religious one, which helps us to know a little bit more about the pop star’s personal life. Few people probably know about RiRi’s religious beliefs, and the fact that this tat is discretely placed in an area where it is often concealed by clothing keeps Rihanna’s side tattoo from being easily viewed by the public. Clearly, the Arabic tattoo conveys a deep meaning for Rihanna, one that she doesn’t care to show off too often. All RiRi’s tattoos seem to have an important meaning for her, and even if we do only catch a few glimpses of Rihanna’s ribcage tattoo, we like what we see! Rihanna loves tattoos, and her new tattoos continue to inspire her fans, leaving them wondering what awesome ink she’ll get next!