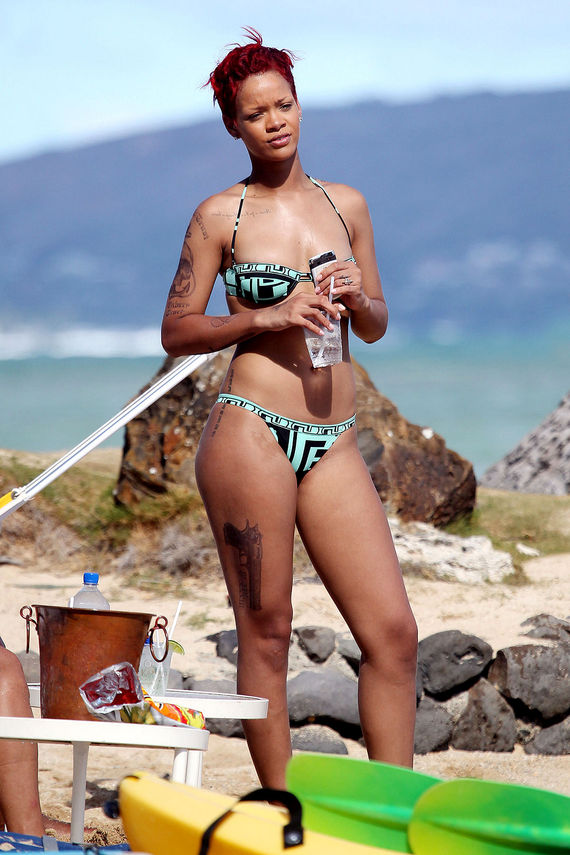 The biggest fake tattoo Rihanna has is the life-size pistol on her right leg. Man! Did this cause quite the controversy when the tattoo pics first emerged. Settle down everyone…it’s not the real thing. Although if it was real, who would be surprised? Not us. Hold up – now that we think of it, Rihanna’s legs and arms are pretty much the only places on her body she doesn’t have a tattoo yet. We may be on to something!

What’s the first thing you notice when you look at this picture of Rihanna? Her gorgeous body. The second? The giant gun tattoo she has on her right thigh. And the equally large anchor tat inked on her arm. Don’t worry everyone, they’re all fake. The gun tattoo Rihanna is sporting on her leg in this pic is for an upcoming movie role, and so is the anchor tattoo and the knife tat on her arm. Seriously though…Rihanna already has over a dozen tattoos on her body. What’s a few more?

Rihanna’s Fake Tattoos in This Photo

If you’re wondering why on earth Rihanna has so many gun tattoos, rest assured, the pistol tattoo the songstress has inked on her right thigh in these beach pics is fake. And so is Rihanna’s anchor tattoo on her right arm….and the knife tat she has on her right forearm. The tattoos Rihanna is sporting in these pics are just a part of her bad-ass role in the upcoming action flick Battleship. Although we wouldn’t be surprised if Rihanna decided the tats were her style and had them permanently inked on her body. 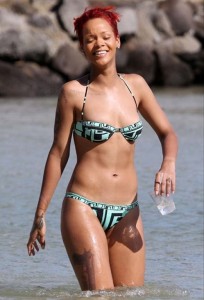 Rihanna Has Fake Tats But Not Fake Boobs!

Celebrity tattoos are almost as popular as celebrity plastic surgery these days, but not for Rihanna – only tattoos for this girl. And for those skeptics out there who think the pop queen got a boob job, just check out these pics of Rihanna showing some skin on the beach in Hawaii…they are all the proof you need. This sexy gal doesn’t need to change a single thing about her body and you all know it!