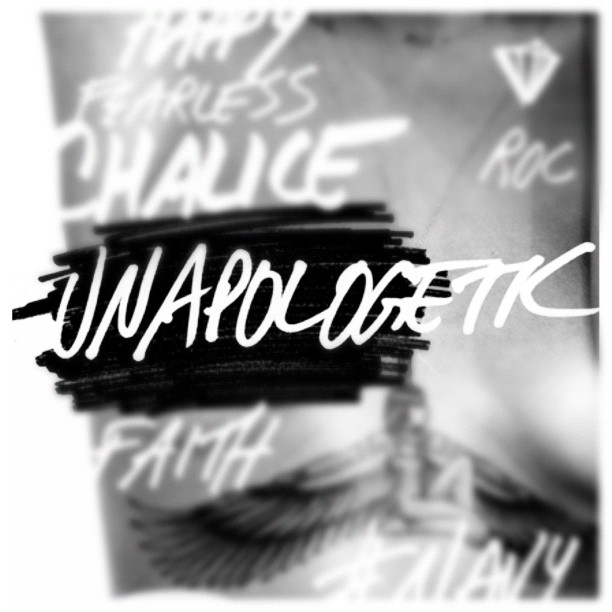 Rihanna’s seventh studio album is set to be released in mid-November, and RiRi really got her fans geared up for the project by posting a sexy pic of the album cover and title, Unapologetic, on Twitter on October 11. The revealing album cover portrays Rihanna in the buff, wearing only a necklace and her large Goddess Isis tattoo on her chest, covered with black and white words the singer apparently uses to describe herself, like happy, fearless and fun. Judging by the racy album cover, RiRi’s upcoming album is sure to ruffle a few feathers, but the singer is completely and totally Unapologetic.

Rihanna got her most recent tattoo – the Goddess Isis – inked on her chest just in time to feature the sexy tat on the cover of her new album, Unapologetic. Rihanna took to Twitter to post a picture of the revealing album artwork on October 11, 2012, and the ever-intimidating RiRi looks pretty darn hot in the photo. Scrawled across the pop star’s bare form is the album title, Unapologetic, as well as a number of other black and white words, including happy, love, fearless, chalice, victory, side effects, faith and diamonds. In addition to her tattoo of the Goddess Isis – inked in honor of her late grandmother Dolly – you can also see a tiny tidbit of RiRi’s “Never a failure, always a lesson” tattoo on her shoulder. Sporting a dark pixie cut, deep red lipstick and nothing else but her tattoos and a necklace, Rihanna plays the part of the temptress oh-so-well, and we’re sure the singer’s seventh studio album will sell like hotcakes.

2012 has proven to be an emotional year for Rihanna, who has been caught up in Chris Brown reconciliation rumors for months now. And after RiRi revealed to Oprah that Breezy was still the love of her life, it seemed like the pop star was in an emotional tailspin. Take a look at the words on Rihanna’s album cover though, and you will see that every single one of them has a positive connotation. RiRi’s upcoming album – set to be released on November 19 – is sure to be fierce, but it’s unlikely it will be filled with love-sick lamentations for her former flame. “Diamonds,” for instance, is described by Rihanna as “happy and hippy,” and it topped this week’s R&B charts. If the other tracks do as well as “Diamonds,” Unapologetic could get the pop star her first No. 1 on the Billboard 200 album chart! 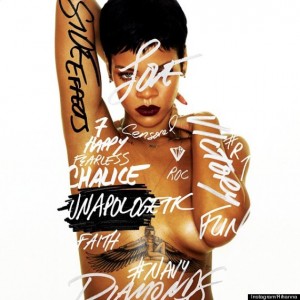 Rihanna gave fans a bit of a carrot on October 10, when she tweeted “Ok I’m officially hyped for my album cover!! I might just leak it early #side effects.” After posting the pic of her in the buff, Rihanna tweeted again, “Find the #ALBUMTITLE in #allBLACKeverything on the #COVER.” This immediately got people thinking “Side Effects” – the only word written in black on the cover photo – was the title. Not the case though; tricky Rihanna actually meant the word covering the blacked-out section of the photo that covers her breast – Unapologetic. RiRi’ seventh LP – referred to only as R7 up until this point – will be released on November 19, which makes the fourth year in a row Rihanna has dropped a new album in mid-November, after Rated R (Nov. 20, 2009), Loud (Nov. 12, 2010), and Talk That Talk (Nov. 18, 2011). This girl knows what she’s doing.