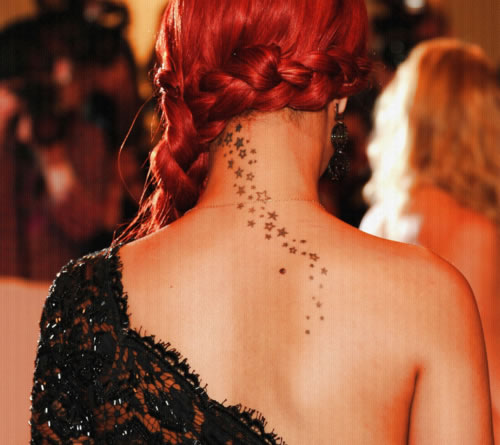 Not many women can pull off braided cherry red extensions paired with a trail of stars tattooed down the neck and back. But you know who can? That’s right, it’s RiRi. Even though Rihanna is best known as a bad-ass pop star, she definitely has no problem rocking a fancy dress, showing off her tattoos and stealing the red carpet. Check out Rihanna’s stars tattoo; it’s one of her largest tats and is also one of the sexiest tattoos the singer has! This picture of Rihanna’s tattoo just goes to show you that she’s got it and she ain’t afraid to flaunt it

Rihanna is best known for three things: her music, her looks and her tattoos. Well, her music is still going strong, she’s hotter than ever, and, as we recently learned with Rihanna’s thug life tattoo, there’s no end in sight for Rihanna’s tattoos. Even though this pic of the superstar doesn’t show her face, it would be hard to miss RiRi’s trademark stars tattoo on her back, which was inked way back in 2008. And with her sexy asymmetrical long-sleeved dress, Rihanna’s back tattoo looks like yet another hot accessory for the babe from Barbados.

Why the Stars Tattoo, Rihanna?

Curious why Rihanna went with a tat featuring dozens of stars cascading down her back? Rihanna’s neck tattoo actually started out as a tribute to then-boyfriend Chris Brown, who also has a few stars inked on his neck. Chris Brown’s neck tat definitely looks like it was meant to match RiRi’s, and, although Rihanna altered her tattoo quite a bit when the couple split up, Chris Brown, notably, did not. When the power duo called it quits after Breezy was accused of assaulting RiRi in 2009, Rihanna had tattoo artist “Bang Bang” add many more stars to the neck tat, which made the ink more about Rihanna and less about her ex. Good for you, Rihanna!

Does Rihanna love tattoos? Yes. Will she keep getting more tats? We don’t see why not! The singer’s got lots of space left on that hot bod of hers, and she’s not afraid to dress it up a little with new tattoos. Rihanna has gotten lots of different tattoos so far and she’s still super young, so we’re guessing there will be more tats in her future. Don’t deny it, you love to see Rihanna’s new tattoos as much as we do. So, keep em comin’ RiRi!

One Response to: The Story Behind Rihanna’s String of Stars Tattoo on the Back of Her Neck