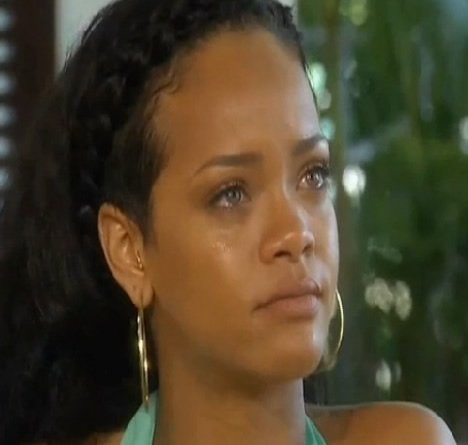 Superstar Rihanna opened up to Oprah during a brand-new interview that aired on August 19, 2012, discussing the real meaning behind her much-talked-about falcon tattoo on her ankle. The new tat has spurred its fair share of controversy since it was inked in June 2012, but now we have info on its real meaning, straight from Rihanna’s lips! Read on to find out exactly what we learned from the pop star’s refreshingly honest interview; you may just be surprised to discover the true meaning behind the fierce falcon tat.

Back in June 2012, Rihanna got a tattoo of a pretty mean-looking falcon inked on her right ankle, and there was a bit of mystery surrounding the new ink and its meaning. Because the design of the falcon on the singer’s ankle bore a pretty close resemblance to a handgun, rumors spread like wildfire that the RiRi was supposedly obsessed with guns. After all, Rihanna also sports a tiny handgun tattoo on her right side, just below her armpit. Rest assured all you Rihanna fans, the singer is not obsessed with guns, and she has not embraced any form of violence since her brutal encounter with Chris Brown back in 2009. Fortunately for us, RiRi revealed the meaning of her falcon tattoo to Oprah on “Oprah’s Next Chapter,” and the truth may actually surprise you!

True Meaning Behind the Falcon Tat

When pictures of Rihanna’s falcon tattoo first hit the web, there was much speculation about its meaning, but the Bajan beauty herself says her falcon tattoo is supposed to stand for God. “Back in the day, they would carve into the walls and they would carve a falcon, because they didn’t have another way of saying a king in the sky,” Rihanna revealed to Oprah during an exclusive interview that aired on August 19, 2012. Truth be told, the singer’s falcon tat is an almost exact replica of a faience falcon that dates back 2,300 years and is housed in the Metropolitan Museum of Art in New York City. “Faience” is the conventional name for a form of pottery featuring a fine tin glaze on a delicate pale buff body, and appears to have been introduced earlier than the ninth century.

What Rihanna’s Tattoos Say About Her

We all know that Rihanna rocks a pretty tough exterior – clearly demonstrated by her fondness for the f-word and her numerous tattoos – but there also seems to be some soft undertones to RiRi’s true image. When the songstress debuted the tiny cross tat on her shoulder, for instance, she was instantly slammed for supposed ties to the Illuminati, a super-secret group that Chris Brown was also recently linked to because of the new snake tattoo on his back. To Rihanna though, the cross inked on her collarbone is probably just another representation of her personal religious beliefs, similar to the meaning of her new falcon tat.

Given Rihanna’s fame, beauty and fortune, it’s no surprise her every move is photographed, recorded, interpreted and re-interpreted on a daily basis. RiRi’s love for tattoos has contributed to a great deal of talk about the successful singer, spurring wild and sometimes conflicting rumors about the 24-year-old’s love life, career and potential reunion with ex-boyfriend, Chris Brown. Chris Brown has sparked his fair share of gossip too, especially about his most recent snake tattoo, which references the “impossible triangle” – a love triangle with Rihanna and girlfriend Karrueche Tran? Regardless of the likely spurious nature of most of these rumors, at least Rihanna keeps it interesting!