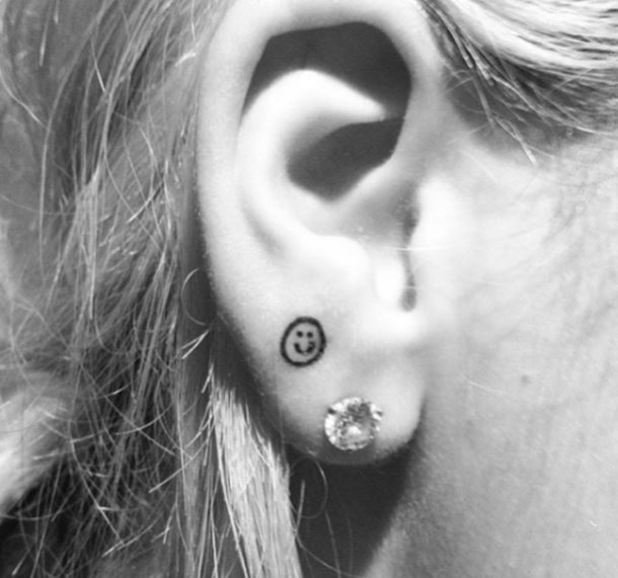 Rita Ora made her highly-anticipated debut as The Voice UK’s newest judge over the weekend, and the pop star obviously has something to smile about, because in addition to pulling in more than eight million viewers for the show’s season premier, she also added a new smiley face tattoo to her growing collection of ink! On January 11, Rita took to Instagram to show off a picture of her new smiley face tattoo, which is rather crudely inked in black on her right earlobe, captioning the snap: “Smile though your heart is breaking…#newtattoo thank you @mensoone.” Rita Ora’s tattoo was inked by Menso One, a California-based tattoo artist known for his graffiti-style ink and who works for Heritage Tattoo in Murrieta.

Rita revealed her latest tattoo just hours before partying it up with bestie Cara Delevingne and other A-list celebrities at the Weinstein Company and Netflix’s 2015 Golden Globes after-party at the Beverly Hilton Hotel in California. The smiley face is a rather small tattoo for Rita Ora, who typically goes for large, bold ink, like the Aphrodite goddess of love tattoo on her arm and her risqué Alberto Vargas pinup girl ribcage tattoo. Lately though, Rita has embraced smaller, more discreet tattoos, like the small black arrow tat on her middle finger, the wishbone tattoo on her wrist, and now her tiny smiley face earlobe tat.

As far as the meaning behind Rita Ora’s smiley face tattoo goes, the “smile though your heart is breaking” quote she included in her Instagram post was taken from the Nat King Cole song “Smile.” As the first verse of lyrics go:

Smile though your heart is aching
Smile even though it’s breaking
When there are clouds in the sky, you’ll get by
If you smile through your fear and sorrow
Smile and maybe tomorrow
You’ll see the sun come shining through for you.

So what exactly does the über-successful Rita Ora have to be sad about? Well, her personal life took quite a hit in 2014, when her relationship with DJ Calvis Harris ended unexpectedly, and the singer has since said about the break-up: “It was the right guy at the wrong time. I was about to start a tour, and he was also all over the place. There’s only so much you can do when you don’t see each other.” Both Rita and Calvin have since moved on from the relationship, and the pop star started dating Tommy Hilfiger’s son, Ricky, though the two called it quits in December 2014, citing their busy schedules as the reason for the split. It seems that Rita Ora, a 23-year-old who says she just “wants to be in love” may be feeling a little lonely these days!