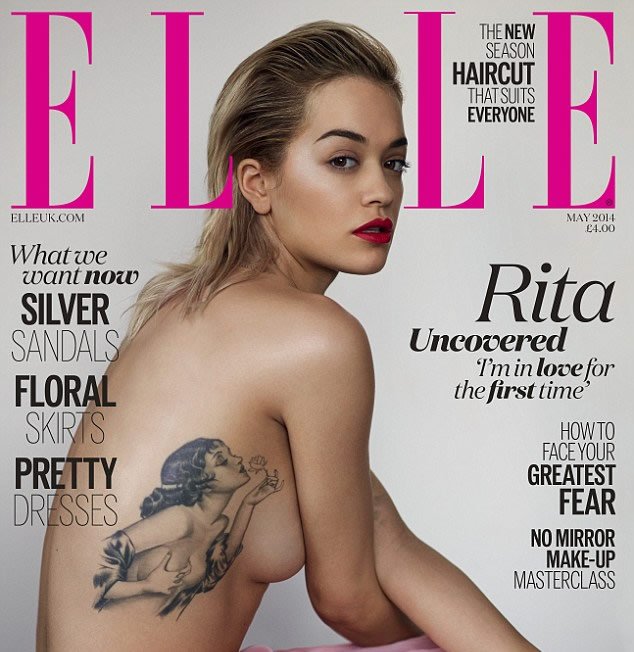 Rita Ora revealed more than just her love for current boyfriend Calvin Harris during a new interview with Elle magazine; the singer also revealed the impressive tattoo on her ribcage and discussed the meaning behind the pinup girl ink. Rita Ora is the cover girl for Elle magazine’s May edition, and we were thrilled to see the pop star’s latest tattoo on display in the risqué photo of Rita the mag chose for its cover. The tat features a beautiful semi-naked woman with dark hair clutching her right breast as she smells a flower, and Rita’s reasoning for getting the ribcage tattoo says a lot about her as a person. While Rita Ora’s tattoo of the pinup girl on her side is more than six months old, the inked-up 23-year-old hasn’t said much about the ink…until now.

During the interview with Elle, Rita opened up about her relationship with beau Calvin Harris and admitted that she had never been in love before meeting the DJ, singer, songwriter and record producer. The two are obviously very happy together, and Rita revealed that the loving relationship had an influence on her upcoming album, and maybe on her tattoo choice too? Talking about the impressive portrait tat that takes up the majority of Rita’s right ribcage, Rita told Elle, “This is Rosetta. It’s based on an original piece by Alberto Vargas, who was an incredible illustrator in the 1930s. He was one of the creators of the pin-up image. That’s our build, our power.”

Rita Ora’s pinup girl tattoo was done by (who else?) celebrity tattoo artist Keith “Bang Bang” McCurdy in September 2013, during a trip Rita and model pal Cara Delevingne took to New York City for New York Fashion Week. According to Bang Bang, Rita’s side tattoo took a whopping five hours to complete, and was at the time the “most detailed tattoo” he’s ever done for a celebrity. That’s pretty impressive, considering Bang Bang has inked plenty of other tattoo-obsessed celebrities and pop stars, including Justin Bieber, Rihanna, Chris Brown and Katy Perry.

We think all of Rita Ora’s tattoos are pretty cool, but the Vargas pin-up girl ink on her side is especially impressive because of its large size (10 inches!) and the incredible detail that went into the tattoo. And Rita herself is obviously pleased with the results. “That’s why I was obsessed with it; learning what men don’t understand about women and what women don’t understand about men,” Rita explained. “I was obsessed with the painting a long time ago, and then I got it done six months ago.” She finished the interview by saying, “I just love pretty things, whether it is art, a song or a pair of shoes.” We can’t wait to see what “pretty” tattoo Rita Ora decides to get next!