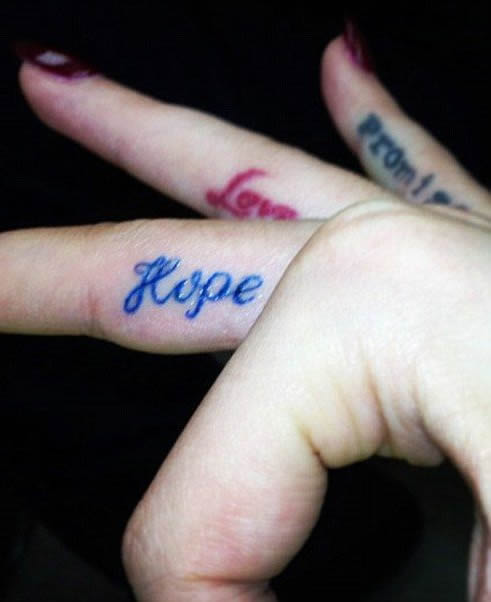 Rita Ora went out on a limb when she debuted her third finger tattoo – the word “Hope” inked in blue script on the inside of her right-hand middle finger, which was assumed to be in anticipation of winning an award during the 2013 BRIT Awards. Rita had the finger tat inked at the Flamin’ Eight tattoo parlor in her hometown of London on February 15, 2013, before heading to the BBC Radio One Studios for her Live Lounge recording in the days leading up to the annual awards show. The meaning of Rita Ora’s tattoo was confirmed shortly thereafter when the singer tweeted a pic of the ink along with the following message: “Hope. Especially today. #newtattoo #BritaOra http://www.brits.co.uk/voting.”

Unfortunately, when the 22-year-old failed to win a BRIT award in either of the two categories she was nominated for (she lost out on an award for British Breakthrough Act to Ben Howard and fell short of Adele’s “Skyfall” for British Single), she changed her tune a bit and said the “Hope” tattoo was a tribute to her nomination alone. During an interview after her disappointing losses, Rita said, “[The ‘Hope’ tattoo] was because I got nominated for the Brits. Just being nominated for the Brits is such a big deal for me.” Lucky for Rita, she opted for the word “Hope” instead of something more specific like “BRIT winner 2013!!” which would have made her a great candidate for tattoo removal.

Rita Loves Her Some Finger Tats!

Finger tattoos are becoming all the rage among female celebrities, and Rita’s “Hope” tat isn’t the only ink she has on her fingers. The British pop star also has the words “Love” and “promise” inked on her ring and pinky fingers, respectively, and if she isn’t careful, she’s going to end up looking like Miley Cyrus, with more tiny random finger tattoos than we can count. Fortunately for Rita, she is more often compared to Rihanna, who has only two finger tattoos to her name so far – one that says “Love” and another that says “Shhh…” RiRi and Rita have a number of other similar tattoos, including tats of their best friend’s birthdays, behind-the-ear tattoos of their astrological signs and large goddess tattoos. Looks like there could be some tattoo inspiration for Rita Ora there!