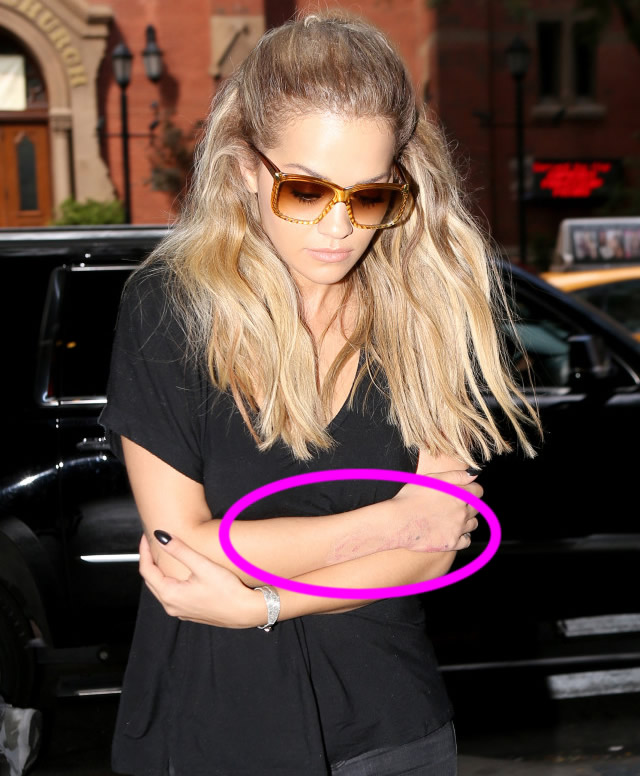 After getting an intricate black and gray rose tattoo on her right wrist and hand to cover up the feather tat she had done by celebrity tattoo artist Keith “Bang Bang” McCurdy in June 2014, Rita Ora has apparently changed her mind for a third time and gotten the entire piece removed altogether, feather and rose alike. The inked-up pop star was spotted out and about recently, with an absent hand tattoo and some telltale red, scar-like marks on her right arm that appear to be the result of a tattoo removal treatment she may have gotten in New York City.

From the very beginning, Rita Ora’s tattoo started out as a delicate feather inked on her right hand and extending onto the top of her wrist only slightly, but the 25-year-old apparently wasn’t happy with the ink, because she had it covered up in May 2015, opting for a much larger and more detailed tattoo of two roses, with one of the blooms extending further up her arm than the feather ever did. Last August, Rita Ora showed off the rose tattoo on her hand at the Billboard Music Awards, and it was still intact, but new photos of the pop star indicate that the ink is in the process of being removed, with only the tip of the stem still visible. 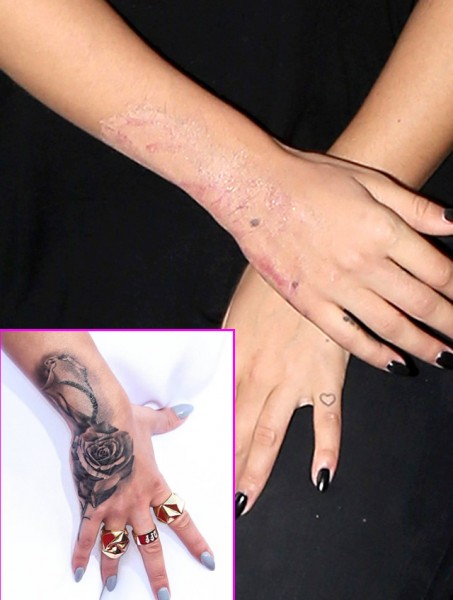 Celebrity tattoo cover-ups and removals aren’t uncommon – just look at Harry Styles and his numerous tattoo re-dos – but we never would have imagined that Rita Ora would undergo laser tattoo removal to get rid of such a nicely done piece, and one that must have been incredibly painful to get lasered off. However, if Rita Ora is reconsidering any of her other tattoos, it may not be long before she has another piece removed, perhaps the tattoo of the goddess Aphrodite on her bicep, or the wishbone tat on her wrist? Stay tuned to get the inside scoop on Rita’s tattoo cover-ups and removals!