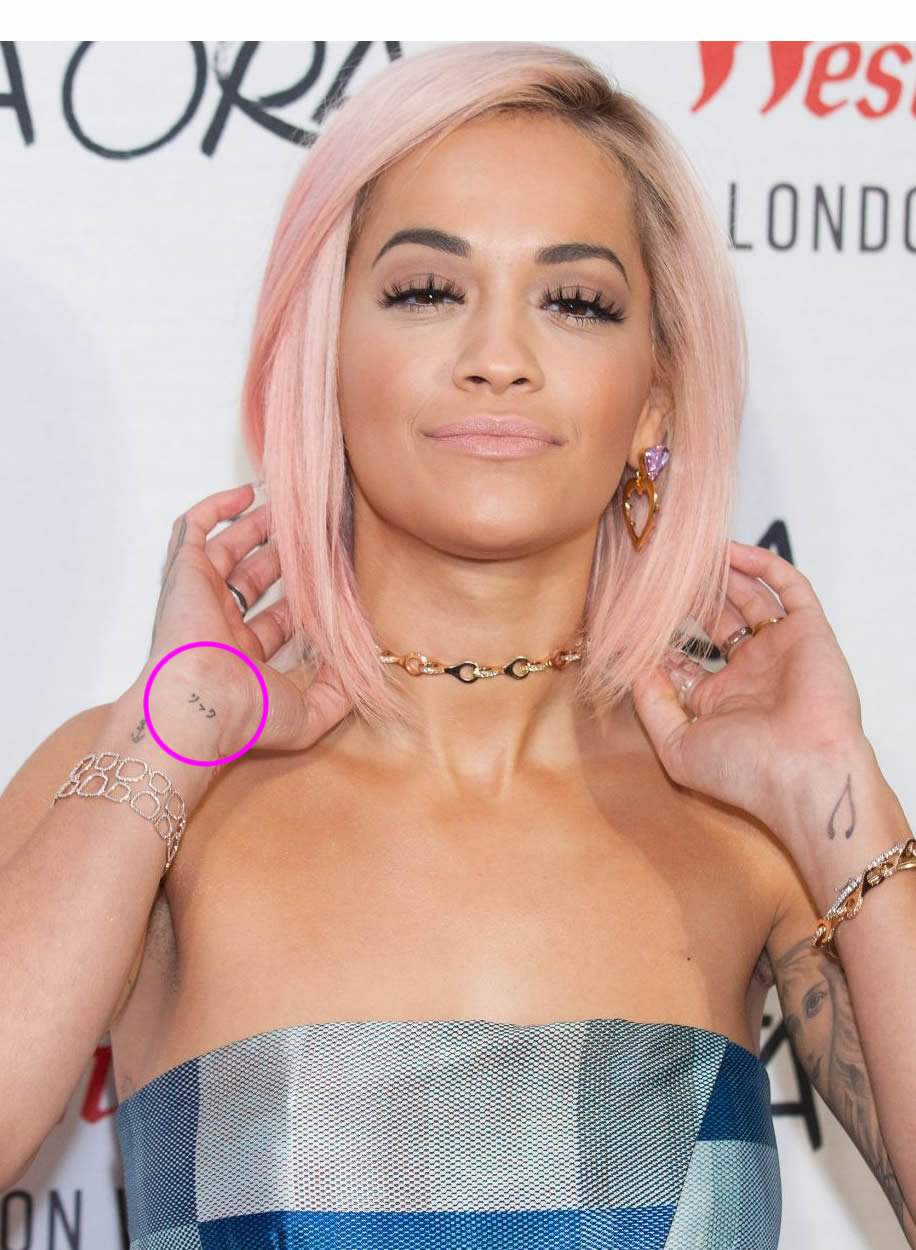 We have been dying to know what Rita Ora had inked on her wrist during a visit to a tattoo shop late last year, and we now know it’s a tattoo of Japanese writing, thanks to a lucky shot of Rita Ora taken on November 3, 2014, when the singer made a guest appearance to turn on the lights at the Westfield Shopping Centre in London. The beautiful 23-year-old graced the red carpet in a unique outfit consisting of blue and gray checkered culottes, minimal makeup, low-key bubblegum pink and blonde hair, and a mysterious new tattoo on her wrist of what appear to be Japanese symbols!

Rita Ora has been hot on the tattoo trail these days, revealing a new wishbone wrist tat and heart pinky tattoo back in December, and then a cute little smiley face tattoo on her earlobe in early January. Even before getting these tattoos though, Rita Ora went under the needle for a tattoo on her wrist, which we can finally say is a small piece of writing done in Japanese. Rita’s Japanese symbols tattoo is inked on the inside of her right wrist, in between her tiny anchor and red “Love Me” tattoos, and may have been done back in October 2014, when the singer was spotted leaving a London tattoo shop with close pal Nick Grimshaw and a telltale clear bandage on her wrist.

There’s no word yet on the meaning behind Rita Ora’s tattoo of the Japanese symbols on her wrist, but judging by the tattoos the pop star has that are tributes to the most important people in her life, we are putting our bets on Rita’s Japanese writing tattoo being inked in honor of something she holds close to her heart. In fact, last September, the month before she had her Japanese wrist tattoo done, Rita Ora flew into Narita International Airport with boyfriend Ricky Hil to launch her Adidas Originals collection in Japan. Perhaps Rita’s new wrist tattoo is a dedication to her blossoming career in fashion?

A special thanks to PopStarTats fan Jack Simcox for the tip about Miley’s new tattoo! Follow him on Twitter: @Simcox97