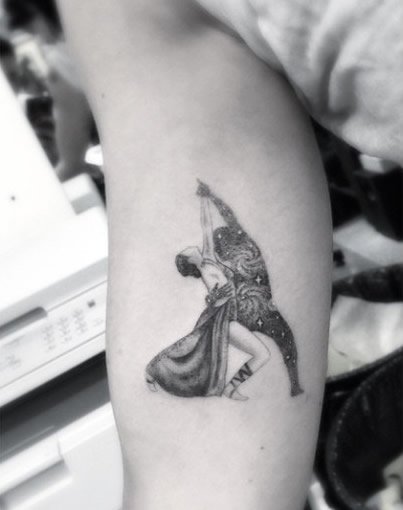 Rumer Willis is still riding high after her Dancing With the Stars victory last month, and the daughter of Bruce Willis and Demi Moore has now commemorated her win with a cool new DWTS tattoo on her arm! Rumer Willis’ new tattoo features a faceless woman in an elegant gown dancing with a man made out of stars (Get it? Dancing with the stars) and is inked on what looks to be the inside of her right forearm. No doubt, the man made out of stars is professional dancer and Rumer’s season 20 DWTS partner Val Chmerkovskiy, whom she will never forget now, thanks to this new tattoo!

The first photo of Rumer Willis’ tattoo was posted on June 1, by celebrity artist Dr. Woo of the Shamrock Social Club tattoo shop in West Hollywood, California. Dr. Woo captioned the photo “Congrats on the win! Lil victory tat on @ruelarue #welldeserved.” It’s true that Rumer Willis worked hard for her win, and now that she’s gotten a taste of victory, she doesn’t want to quit. The 26-year-old will join Dancing With the Stars Live! Perfect Ten Tour this summer, where she will continue to show off her killer dance moves alongside DWTS pros Witney Carson, Val Chmerkovskiy, Artem Chigvintsev, Emma Slater and Peta Murgatroyd, with All-Stars champion Melissa Rycroft as host. This may be Rumer Willis’ latest tattoo to date, but the DWTS winner is no stranger to ink. She already rocks a pretty impressive collection of tats, ranging from evil eyes to lion heads, and just last year, the 26-year-old got a tattoo of the word “sauce” on her hand as a tribute to sisters Scout, 23, and Tallulah, 21. Speaking of her sisters, they couldn’t be prouder of Rumer’s stint on Dancing With the Stars. As little sis Tallulah put it, “Who knew she could dance? And then here she is – an incredible dancer. Just give her something to try and she’s going to kill it.” Congrats, Rumer!