While the rest of us were celebrating with loved ones over Father’s Day weekend, Amber Rose was busy covering up the large portrait tattoo of her ex-husband and the father of her infant son, rapper Wiz Khalifa, which she had inked on her arm back in April 2013. News of Amber Rose’s tattoo cover-up comes about 10 months after the model filed for divorce from Wiz, and in the midst of rumors that the 31-year-old was planning to have the infamous Dr. Tatoff remove the rapper’s goofy face from her arm for good.

In a video shot by a TMZ photographer on July 20, Amber Rose is seen leaving a San Fernando Valley tattoo shop, sporting a large white bandage on her upper left arm, where Wiz Khalifa’s face used to be. A couple of days later, Amber posted a video showing a tattoo featuring several red roses where Wiz Khalifa’s face used to be. It was just last month that Amber Rose said she had no plans to remove the relatively new portrait tattoo of Wiz (unless she got involved in a “very serious” relationship), but it looks like she decided to go through with the tattoo removal after all. And on Father’s Day weekend, no less! 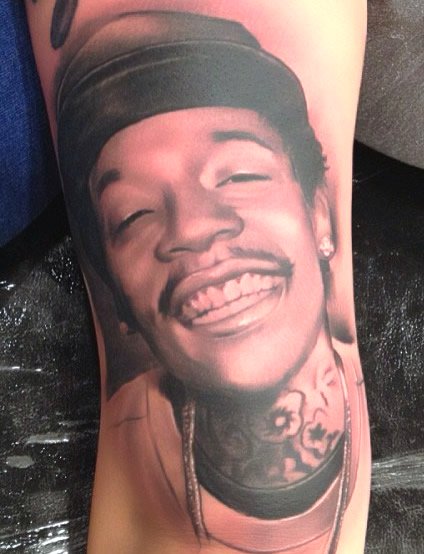 We’re not surprised that Amber Rose has opted for a tattoo cover-up, especially since Wiz was accused of cheating on her while they were married, and since Amber has been spending more and more time with her new beau, 25-year-old rapper Machine Gun Kelly. And while she admitted in a “Larry King Now” interview that her and Wiz still love each other and are spending this time learning how to be friends, it seems fitting that the model would choose a bed of roses to cover up the portrait of her ex, her name being being Amber Rose and all. Whatever way she feels about Wiz and their failed relationship, it looks like Amber plans to move on with her life!