Pop star Ariana Grande may be known for her song “Tattooed Heart,” but the singer chose the side of her neck as the location for her latest tattoo – a simple outline of a crescent moon inked in black. Ariana took to Instagram to show off her new tattoo on April 14, posting a black and white photo with her face off-screen, but offering a clear view of a brand-new crescent moon tattoo on the side of her neck, just below her left ear. Adding a little mystery as to the meaning behind her new ink, Ariana captioned the tattoo photo with just a crescent moon emoji, and then linked the pic to a Twitter post reading simply “moon baby.”

Ariana Grande is currently in the thick of her second concert tour (and first international tour), The Honeymoon Tour, which began in February and is in support of her second studio album, My Everything. The singer will perform at 82 locations over the course of 10 months, but she spent the past week in California, before heading to Washington on April 14, so she could have had her new crescent moon neck tattoo done in either location. Like all of her other tats, Ariana Grande’s crescent moon tattoo is very small, and it can be easily hidden behind her famous mane whenever she wants.

Although Ariana hasn’t yet revealed the meaning behind her new tattoo, crescent moon tattoos are actually very symbolic, and this particular design can stand for anything from dreams and intuition to feminine power, sensuality and energy. Ariana’s relationship with rapper Big Sean is still going strong after the couple confirmed they were dating six or seven months ago, and judging by the name of her latest studio album and world tour, it’s possible that Ariana’s crescent moon tattoo is a tribute to her 26-year-old rapper beau. 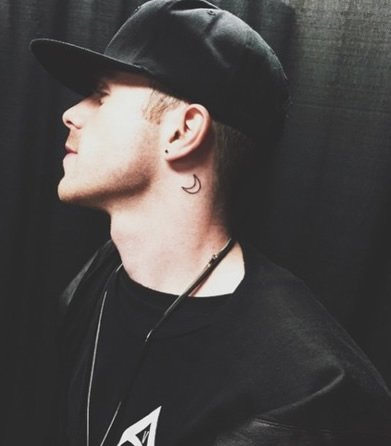 This new crescent moon ink marks tattoo number four for Ariana Grande. She already has inked on the back of her neck the French phrase “mille tendresse,” a quote from Breakfast at Tiffany’s that translates to “a thousand tendernesses,” and a tattoo reading “Bellissima” on her ribcage – a tribute to her late grandfather. She also sports a small heart tattoo on her toe, which she had inked in 2012 while recording her debut album, Yours Truly. If her crescent moon tat isn’t exactly a shout-out to Big Sean, it could be that Ariana Grande may be following in the footsteps of Katy Perry, getting a new tattoo to commemorate each of her world tours!