Rob Kardashian obviously didn’t learn his lesson when he got a tattoo of actress and singer Adrienne Bailon’s name inked on his ribcage back when they were together, nor when he started seeing pop star Rita Ora, and decided to cover up the “Adrienne Bailon” tattoo with a portrait of the British pop star. And now that the youngest Kardashian sibling has popped the question to model Blac Chyna, with whom he is expecting his first child this fall, it appears he is at it again – debuting a new tattoo on his neck that could either be a tribute to his future wife, Blac Chyna, or to their unborn child.

Our first glimpse of Rob Kardashian’s new neck tattoo came last week, when Chyna posted a series of videos to Snapchat, in which Rob appears to have some fresh ink on his neck of the name “Anjila” in cursive. Chyna’s real name is Angela White, and in Arabic, her name would be spelled “Anjila.” There is also some speculation that Rob Kardashian’s tattoo may actually read “Aniyla,” which is apparently what the couple is planning to name their unborn daughter, who is due in October. Either way, Rob’s neck tattoo has the potential to be a pretty sweet token of his love for his new family. 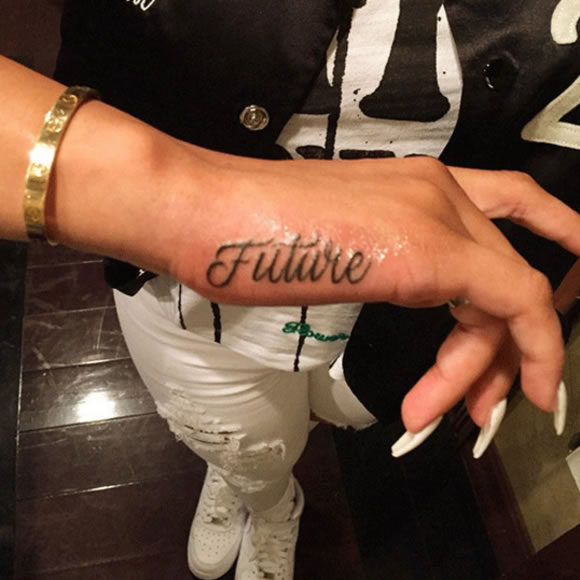 The only problem is, Blac Chyna is a bit of a flake when it comes to relationships, and just last fall, she showed off a new tattoo on her hand dedicated to Freebandz rapper, Future, amid rumors that the two were dating. There was a lot of speculation that Chyna’s “Future” tattoo was a fake, but, according to a series of Snapchat videos posted to the 27-year-old’s Snapchat account in February 2016, she had the regrettable hand tattoo removed by a specialist. Perhaps the mom-to-be was just making room for a tattoo tribute to Rob Kardashian, and plans to return the favor of a relationship tattoo.

Despite their checkered dating past, it appears that Rob Kardashian and Blac Chyna may actually be the real deal. After all, Rob did drive 1,400 miles to Austin, Texas back in January, to pick Blac Chyna up when she was released from jail, where she was serving time for being drunk and disorderly aboard a flight from Los Angeles to Austin, and then turned right around and drove her the 1,400 miles back to L.A., just so she could avoid being swarmed by paparazzi. That’s true love, right? Plus, they have a new show on E! and are expecting their first child together in October. Let’s just hope, for Rob’s sake, that this relationship actually lasts.