Caitlyn Jenner, formerly Bruce Jenner, has been in the news quite a bit lately, and now the 65-year-old is making headlines yet again, but this time as the inspiration for a Greensboro, North Carolina man’s new tattoo. In what he calls a show of LGBT solidarity, Jason Hatfield had the likeness of Caitlyn Jenner’s now-famous Vanity Fair magazine cover inked on the inside of his left forearm, white bustier and all. As a gay man who grew up in the south, Jason Hatfield says he knows what it’s like pretending to be someone else, and the pin-up image of Caitlyn Jenner he now has inked on his arm is a reminder of her bravery.

“Caitlyn Jenner’s been so brave,” said Hatfield during a recent interview with NBC News. “As an athlete and everything that was done before she came out, she was incredible. And now she’s a thousand times the role model a Kardashian is!” Caitlyn Jenner first appeared as a woman on the cover of the June 1 issue of Vanity Fair, in a picture taken by respected photographer Annie Leibovitz. The caption scrolled across the cover, which read “Call Me Caitlyn,” was the world’s first look at the woman Jenner had previously only referred to as “her” in April’s revealing interview with Diane Sawyer. 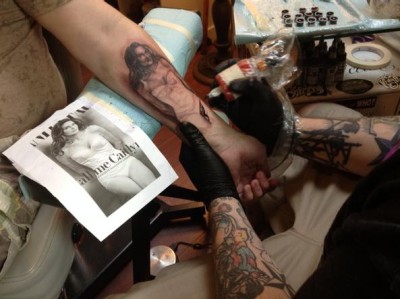 In a former life, Caitlyn Jenner (then Bruce) adorned the front of a Wheaties cereal box, as a famed track and field athlete and Olympic gold medal winner. Today, Caitlyn Jenner is enjoying life as a woman, a transgender icon and soon-to-be-star of the E! reality mini-series “I am Cait.” According to Jason Hatfield, his new Caitlyn Jenner tattoo, which was inked by Greensboro tattoo artist Brandon Thurston, of the Tried and True Tattoo Company, and took a whopping four hours to complete, is “my tribute not only to the transsexual community and the LGBT community and my personal friends, but also to her [Caitlyn’s] bravery as well.”