Johnny Depp is famous for having his “Winona Forever” tattoo on his upper arm changed to “Wino Forever” when the former couple called it quits in 1992, and it appears Depp may have recently pulled a similar tattoo cover-up on his fingers. Johnny Depp’s latest tattoo edit comes in the midst of his impending divorce from wife Amber Heard, to whom he has been married for about a year, and says a lot about how he feels towards the 30-year-old actress, who has filed a temporary restraining order against him, alleging domestic abuse.

During a recent performance with his band, Hollywood Vampires, in Bethlehem, Pennsylvania, Johnny Depp was spotted with an altered version of the “SLIM” tattoo on his knuckles, a piece that was believed to be a reference to his now-estranged wife, Amber Heard. The edited tattoo now reads “SCUM,” which leaves little to the imagination as far as how he feels about his soon-to-be-ex. In addition to his “SLIM” knuckles tattoo, Depp also had a tattoo of a pin-up model resembling Amber Heard inked on his bicep, but appears to have covered up that piece as well. The actor was spotted recently with the pin-up tattoo blotted out with black ink.

Amber Heard filed for divorce back in May, alleging that Johnny Depp was physically abusive towards her, but Depp’s ex, Winona Ryder herself, was quick to speak out in his defense, saying, “I can only speak from my own experience, which was wildly different than what is being said. He was never, never that way toward me. Never abusive at all toward me. I only know him as a really good, loving, caring guy who is very, very protective of the people he loves.” Depp’s ex-girlfriend, Vanessa Paradis, with whom he has two children, also came to the actor’s defense, writing in an open letter, “In all the years I have known Johnny, he has never been physically abusive with me and this looks nothing like the man I lived with for 14 wonderful years.” 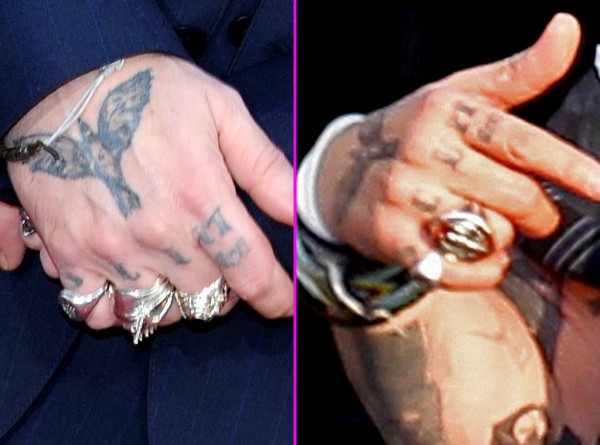 It looks like Johnny Depp has managed to maintain a working relationship with at least two of his exes, despite splitting with both Ryder and Paradis, but we have a feeling things will never be copacetic between him and Heard. We’re hoping Depp, at the very least, learned his lesson this time around, as far as getting tattoos dedicated to his girlfriends/fiancées/wives.