No doubt you’ve heard his name in passing or while researching some of your favorite pop stars’ tattoos, but what do you really know about the infamous Bang Bang? For one, his real name is Keith McCurdy – the nickname “Bang Bang” was (appropriately) inspired by the double pistol tattoos the artist sports on his neck – and he first started inking his own tats with a rudimentary tattoo kit back in high school because he didn’t want to pay for them. He perfected his artwork by practicing on himself, his friends and his cousins for a year out of his mom’s kitchen and a sketchy tattoo parlor in Delaware, before moving to Manhattan at 19 and eventually opening what is now known as East Side Ink. Bang Bang inked his first celebrity at the age of 20 – it was Rihanna’s Sanskrit side tattoo – and his career was born.

Lucky for us, Bang Bang took some time out of his busy schedule and sat down for a rare interview with The Cut, during which he divulged some juicy details about what makes his own artwork special, some of the best tattoos he has inked (and received in return), and what high-profile celebrity he wants to brand next. Unlike many other tattoo “artists” out there – and there are plenty – Bang Bang is a true tattoo master, drawing the likes of serious tattoo lovers like Rihanna, Chris Brown, Justin Bieber and Katy Perry to his New York tattoo shop. “I always try to do work that is different from what any other tattoo artist is doing,” Bang Bang explained during the interview. “I don’t make things that are busy, the flow and motion with the body is very important.” 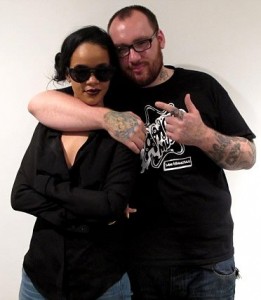 The first tattoo Bang Bang ever inked was on himself – a Japanese Kanji symbol with the English version of the word written below it – which he did in his mom’s kitchen. Since then, Bang Bang has moved up in the world, opening his first tattoo shop in an amazing space on the Lower East Side that used to be a gallery. With a private underground room that is perfect for celebrities or any tattoos that require nudity, and an outdoor area where clients can relax and practice their golf put, Bang Bang’s studio is the ultimate space for inking pop star tattoos. For Bang Bang though, it’s not just about choosing a tattoo and getting it inked. “[You have to] do a lot of research. Find someone who can do everything amazing. Then you meet them and see if you have the right vibe. Because you’re going to sit with them for hours and you want to get along with them. So that’s really important.”

Bang Bang Gets Inked by Celebrities

Besides his incredible artwork, there is another notable factor that sets Bang Bang apart from other tattoo artists – after inking a tattoo, he lets his clients tattoo him in return. “That’s kind of my deal. I’m like a needy fan and I need a 30 minute autograph,” Bang Bang admitted during the interview. So not only has Bang Bang inked tons of celebrities, but he has one-of-a-kind artwork inked by each of them on his leg as well. His favorite? Rihanna’s, of course! She did “a little umbrella with an ‘R’” in 2009. He requested the umbrella ink in appreciation for all the publicity the singer had brought him, and it quickly became a tradition. So whether Rihanna is to thank for his reputation as one of the best tattoo artists around, Bang Bang is a long way from his mom’s kitchen, that’s for damn sure!