When Michael Phelps mean-mugged Chad le Clos before the Olympic swimmers went head-to-head in the final for the 200-meter butterfly, he probably never expected someone to get an image of now-famed #PhelpsFace inked on their body. That’s exactly what Ricky Fung, owner of Chronic Ink in Toronto, did though, and the result is pretty amazing, if you ask us.

Ricky Fung’s new tattoo is inked on the inside of his right calf, and features a near-exact replica of Michael Phelps glaring at his swimming rival, Chad le Clos. “I wasn’t even a big Phelps fan before this, and I’m not really a swim fan,” Fung told ESPN. “But just seeing him go out and win the way he has has been inspiring to me.” Fung posted a photo of his new leg tattoo, inked by Chronic Ink artist Livia Tsang, on Instagram on Friday, captioning the snap, “Congrats on being the G.O.A.T. @m_phelps00.”

The leg tattoo of Michael Phelps’ glare is awesome enough on its own, but the story behind the “mean mug heard ‘round the world” is even better. Phelps was glaring at Chas le Clos because of comments the South African swimmer made about him prior to the race. According to reports, when Phelps “un-retired” in 2014, and decided to compete in the 200-meter butterfly, he said it was because he thought the field was slow and had a chance to win gold. In response, le Clos had this to say: “[Phelps] has been talking a lot of smack in the media about how slow the butterfly is, so I just can’t wait until I race him. I just did a 100m butterfly time that Phelps hasn’t done in four years, so he can keep quiet now.” 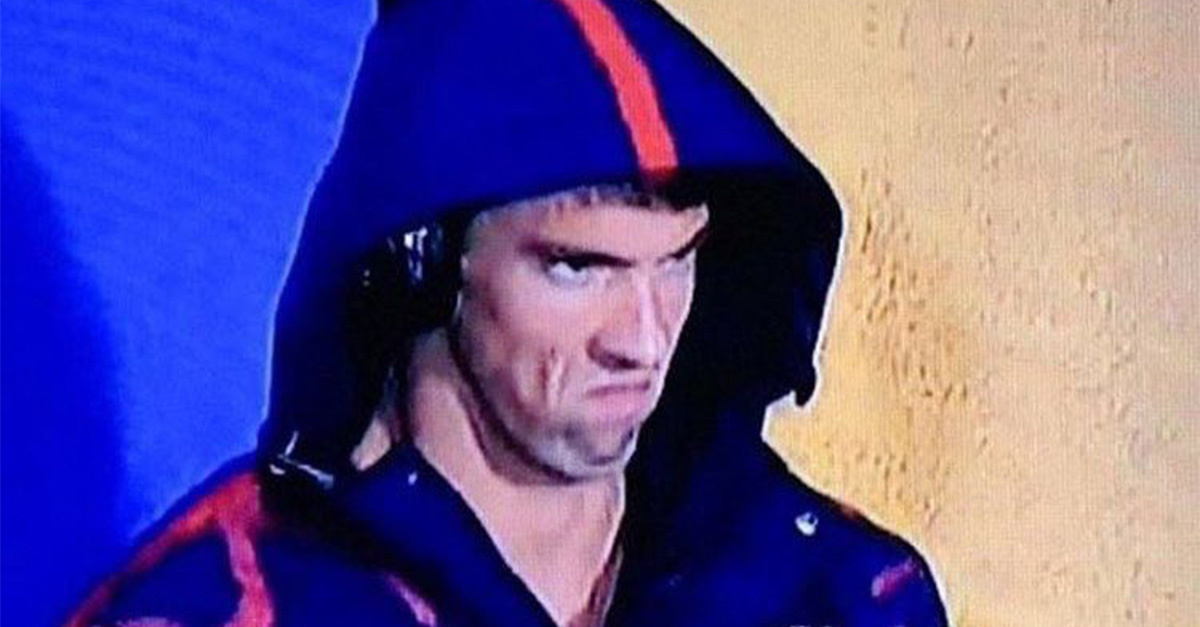 So, before the two swimmers went head-to-head in the 200-meter butterfly on Monday, video footage showed Phelps sitting in his chair in the call room while le Clos, who beat Phelps in the same race in London four years ago, shadowboxed in front of him, and the decorated Olympian was basically giving le Clos a Darth Maul stare. Before the two even competed in the final, Ricky Fung decided to get the image of Michael Phelps’ face tattooed on his body. “He had always talked about getting a sleeve of athletes and famous people,” said Livia Tsang about Ricky Fung, and starting the sleeve with an image of the Michael Phelps “death stare face” was pretty brilliant.

As if Fung’s tattoo needed another reason to be awesome, Michael Phelps ended up winning the gold in the 200-meter butterfly final, while le Clos didn’t medal in the race at all. As for why Fung decided to get the Phelps tattoo in the first place, he says, “[…] looking at it is a good reminder every day to go out with focus and dominate like he did.”

So, this happened. Thank you @m_phelps00 for the kind words and the game face that made my art go viral. Trying to be cool. Failing a little bit. (Taken from his Facebook Live video) __________ #michaelphelps #becool #sweetsweetvalidation #olympics #rio2016 #chronicink