To commemorate their experience on the Freeform teen drama Pretty Little Liars, which wrapped its seventh and final season on October 27, the show’s six leading ladies treated themselves to an unforgettable post-wrap gift, getting matching tattoos on their fingers, courtesy of Shamrock Social Club in West Hollywood, California. Pretty Little Liars debuted in 2010, and will air its final ten episodes in April 2017, followed by an exclusive tell-all special that will air immediately afterwards. And while Lucy Hale and her five Pretty Little Liars co-stars were marking the end of the show’s seventh and final season with their matching finger tattoos, they were also celebrating co-star Troian Bellisario’s 31st birthday!

The girls’ matching finger tats stand for the first initial of each of their character’s names, and the tats are inked in a black typewriter font on their index fingers, or as the girls call them, their “shh” fingers, a nod to the “shh” moment from the show’s opening sequence. Lucy Hale shared a photo of her co-stars’ matching tattoos on Instagram, captioning the snap, “This happened. Thank you @shamrocksocialclub for taking care of us. We couldn’t not get tattoos to commemorate the show! And obviously on our “shh” finger.” In another photo posted by Lucy Hale, you can see the girls who splurged for a matching Pretty Little Liars tattoo include Lucy (Aria), Ashley Benson (Hanna), Troian Bellisario (Spencer), Shay Mitchell (Emily), Sasha Pieterse (Ali) and Janel Parrish (Mona). 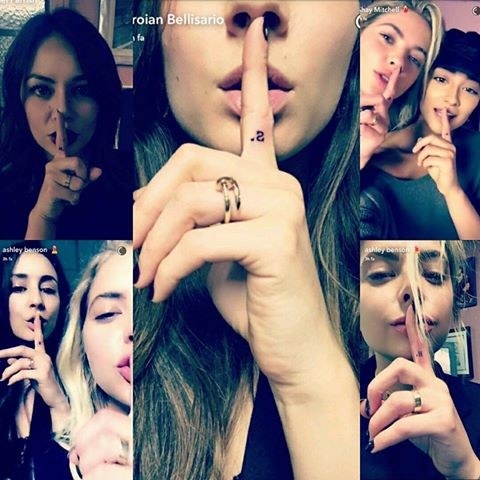 It’s been an emotional couple of weeks for the Pretty Little Liars stars, and during the finale’s two-week filming process, the girls posted a series of messages on social media, thanking their fans and each other for a memorable seven years on the Freeform series. “I will never forget this experience. I was so lucky to work with such amazing people who have affected by life greatly,” wrote Ashley Benson. “I am so happy to know they will be my family from here on out. I’m sad to say goodbye to Hanna…but I’m excited to see what the future holds and I’m so happy to know that all of you will be by my side.” The Pretty Little Liars girls are obviously very close friends, and in addition to their matching finger tattoos, they also have matching rings gifted to them by Marlene King, the show’s executive producer and showrunner. 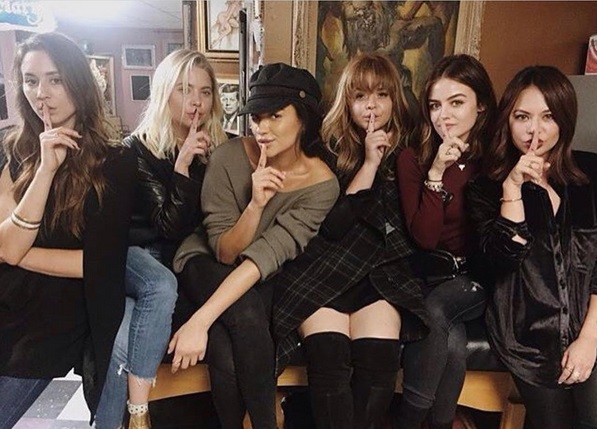