Cara Delevingne is starring in the upcoming superhero film “Suicide Squad” alongside A-listers like Jared Leto and Margot Robbie, and the model-turned-actress recently got a new tattoo on her foot as a tribute to the film. The cast of “Suicide Squad” has just wrapped up filming on the movie, due out next August, and they obviously enjoyed working with one another quite a bit, since many of the cast members opted for matching foot tattoos commemorating the new movie. And not only did they get matching tattoos, but they actually let their cast mates operate the tattoo gun!

On August 27, Cara Delevingne posted an Instagram photo of Margot Robbie inking the bottom of her right foot, decked out in her full Harley Quinn regalia, complete with platinum blonde pigtails and red and blue face makeup. In “Suicide Squad,” Margot plays a crazed supervillain and former psychiatrist, while Cara Delevingne plays Enchantress, a powerful sorceress. In real life though, Cara must fancy herself an amateur tattoo artist, because after getting a foot tattoo from Margot/Harley, the model turned the tattoo gun on another cast member and gave them their own “Suicide Squad” foot tattoo.

We haven’t caught a glimpse of Cara Delevingne’s tattoo on her foot yet, but it seems obvious that the ink is a tribute to her role in “Suicide Squad.” And if the photos the film’s cast is posting on Instagram are any clue, they have all opted for matching “SKWAD” tattoos like the one director David Ayer had Margot Robbie ink on his arm, and the “SKWAD” tattoos actors Jai Courtney and Joel Kinnaman had done by Will Smith. As Joel captioned his Instagram snap, “Got my #skwad tattoo  Will has many many talents, tattooing is not one of them. It was like watching a drunk baby fly a helicopter.” 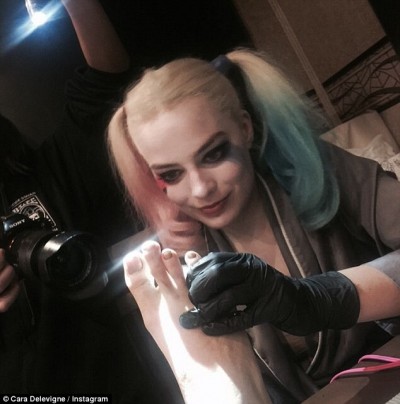 In a photo of the entire “Suicide Squad” cast posted on actor Jay Hernandez’s Instagram page on August 28, the caption reads “Last day on set with the skwad. Going to miss this. It’s been a wild ride.” Judging by the fact that the “Suicide Squad” cast members decided out of the blue to tattoo one another with matching “SKWAD” tattoos, it certainly seems like filming the movie with that crew was a wild ride. Now they just have to hope that “Suicide Squad” gets good reviews; otherwise their bad-ass matching cast tattoos may end up being a bit embarrassing…