Next to his wildly successful music career and controversial arrest record, Chris Brown is probably best known for his massive collection of tattoos, the first of which was inked when the singer was only 13 years old. Since defying his mother on his thirteenth birthday (she reportedly told him: “You ain’t gettin’ no tattoo!”) and getting a Jesus tattoo inked on his arm, Chris has gotten so many tattoos it’s really tough to keep track. Fortunately, we’ve done it for you! Chris Brown’s chest tattoos are particularly interesting because they stand out more than his arm sleeves, which leave little skin left for the tattoo lover to ink up. We know you all love to read about Breezy, and we know his tattoos are what you’re interested in…so, for all of you out there dying to know about Chris Brown’s tattoos and their meanings, we have compiled the most up-to-date and informative resource about the singer’s chest tats and other body ink just for you!

Nearly five months after revealing the “X” tattoo on his foot, Chris Brown posted a picture on Instagram on July 17, 2013, showing off a huge dinosaur tattoo inked on his left side. Breezy’s tattoo depicts a large skeleton of the notoriously vicious Tyrannosaurus Rex, and seems to follow a similar theme to some of the controversial singer’s other tats – ferocity and fighting back. In the side tattoo, the T-Rex, universally known as the king of the dinosaurs, looks poised to fight – it’s gigantic skull turned to the side with it’s crazy strong jaws open wide and its massive teeth flashing. Chris Brown’s dinosaur tattoo is inked in black and white and joins several other seemingly aggressive tattoos he already has, including the lion tat on his neck, his snake back tattoo, the Indian wolf chief tattoo on his neck, and his fighter jet chest tattoo. 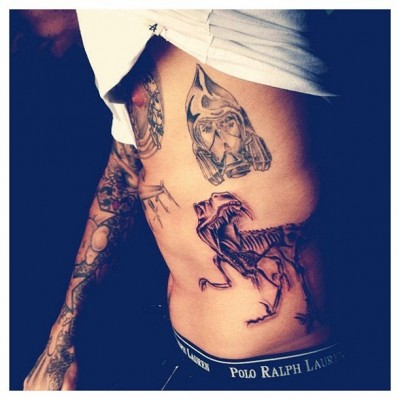 Chris Brown debuted another chest tattoo on September 12, 2012, showing off via Instagram a large fighter jet inked across his abs, just below his wings tat. Brown went to tattoo artist John Petro for the ample chest tattoo, which resembles in location and appearance the Goddess Isis chest tattoo that Rihanna revealed just a few days prior. The F16 in Brown’s chest tat takes up a large part of the singer’s torso, with the nose of the plane pointing towards his naval and the wings curving around to his sides. Before completing the fighter jet tattoo, Brown’s tattoo artist tweeted, “About to go in on this #fighterjet #f16 #plane #tattoo on #chrisbrown.” 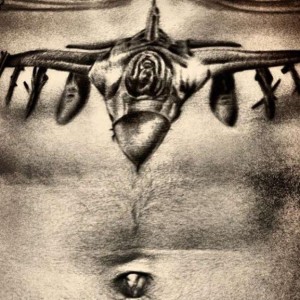 Breezy unfortunately, didn’t have much to say about the new tat, except for “Fly,” which is the caption he wrote to accompany the pic of the chest tattoo he posted on Instagram.

One of Chris Brown’s more recent chest tattoos is an image of himself inked on the left side of his chest, below his armpit. The chest tat features a picture of Chris wearing a respiratory mask and a hoodie that falls almost to his suggestively winking left eye. Chris Brown’s chest tattoo is one of many tats on his body that represent the R&B star’s love for graffiti, which it seems he may be getting back in to. 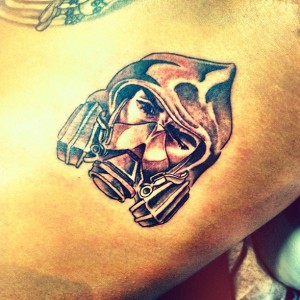 The art form is obviously something that Breezy holds dear to his heart, since he also named his third studio album “Graffiti,” and recently spray painted a funky mural on the wall of the Jenesse Center, a domestic violence intervention center in L.A. Chris Brown’s chest tat was inked by Peter Koskela of Black Banditz Tattoo in L.A., and the singer posted his new tat on Twitter on July 10, 2012 along with the message “The Bandit!! @petertattooist new ink!”

In addition to the wings, Chris Brown’s large chest tattoo also includes four stars, two large ones inked to the sides of the wings and two small ones inked above the wings. The stars in Breezy’s chest tattoo are outlined in black but aren’t shaded in, which makes them stand out really well against the black background. 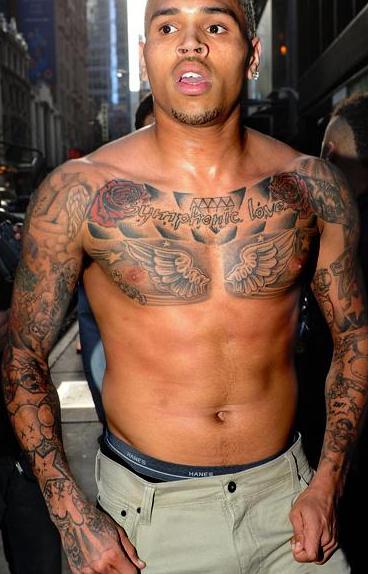 The celestial images must mean something important to Chris Brown, since he also got a neck tattoo with stars, which supposedly matches the stars tattoo the singer’s ex-girlfriend Rihanna has on her neck and back.

When Chris Brown’s chest tattoo first made its appearance in 2009, many fans of the R&B star wondered if it was complete, since the “symphonic love” tat met up with his sleeve tattoos but left the rest of his chest looking unfinished. Just as we suspected, in December 2010, Breezy’s chest tattoo received a new addition featuring two large wings, which were expertly inked on his pecs. Pictures of Chris’ chest tattoo show the wings tattoo perfectly following the outline of his chest, which really makes the tattoo look sexy and almost tribal. Similar to the meaning of his other tattoos, the wings in Chris Brown’s chest tattoo are probably meant to be angel wings, which could represents his religious beliefs. 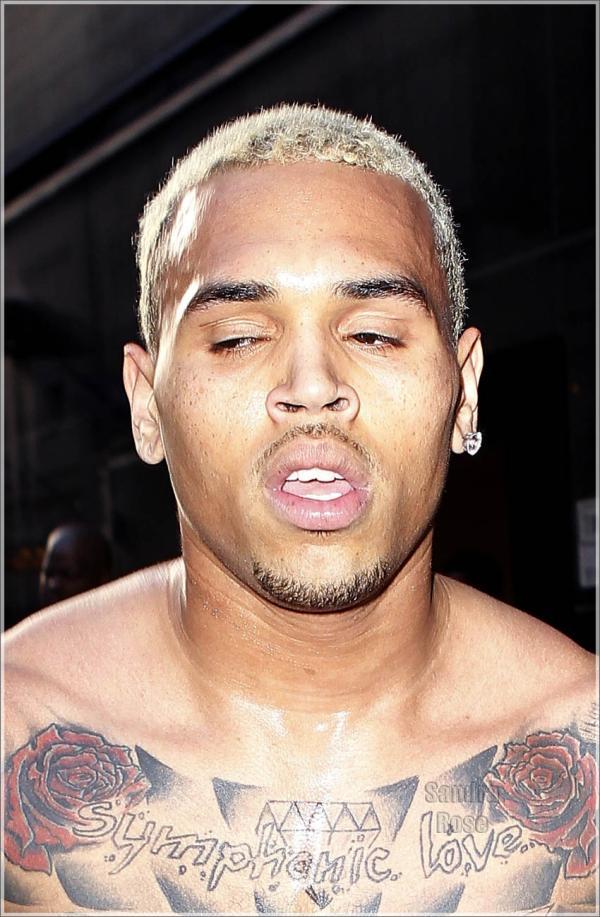 The most visible of all Chris Brown’s tattoos are his chest tats (mostly because he likes to run around shirtless). Extending across the top part of his chest from shoulder to shoulder, Chris has a tattoo that reads “symphonic love” in lower case letters. His chest tattoo also features a large diamond, over which the text is inked, and two large roses, one located at each end of the text. The “symphonic love” in Chris Brown’s chest tattoo is inked in big letters that are outlined instead of filled in with black, really making the text stand out against the shaded black background. Although the majority of the singer’s chest tat is inked in black and white, the roses in the tat are red, so they really pop and draw your attention to the large chest tattoo.

Since pictures of Chris Brown’s tattoo cropped up while the singer was on vacation in Hawaii, many people believe the “symphonic love” tat was actually inked on the island. Although he hasn’t said much about his tattoos in public, it’s not hard to figure out the meaning behind Chris Brown’s “symphonic love” tat. The first tat the controversial singer ever got was an arm tattoo featuring an image of Jesus surrounded by music notes, symbolizing his gratitude for his God-given musical talent. Following this same theme, Chris Brown’s chest tattoo probably represents his love and passion for music.