Pretty much everyone was thrilled when Demi Lovato covered up her weird lip print tattoo with a pretty black and gray rose last month. Well, everyone except the tattoo artist responsible for the old ink, which Demi not-so-subtly referred to as a “vagina tattoo” when she posted a pic of the cover-up tat. After seeing that Demi had covered up the lip print she inked on the pop star’s wrist in the back of a Warped Tour tour bus back in July 2011, tattoo artist Ashley McMullen slammed Demi Lovato in a pretty harsh Instagram comment that has since garnered national attention. But what’s even BETTER than the tattoo artist’s bitter rant is Demi Lovato’s equally harsh (but oh-so-awesome) response. Check it out below!

At the time that Demi had the now-famous “vagina tattoo” done, she and gal pals Ivey Ensley, Lauren Pietra and Hanna Beth Merjos decided to get matching friendship tattoos of each other’s lip prints, which is how Demi ended up with a kiss mark designed after Ivey’s pretty pout. Fast forward four years and Demi is covering up the famous lip print with a fresh rose tattoo, captioning the Instagram photo of her new ink “Bye bye (lips emoji) and hello (rose emoji)…Thank you SO MUCH to my brother @GEESPOTAT2…It looks beaaauutiful and I LOVE it!! #RIPvaginatattoo #kidsdontdodrugs.” Well, apparently Demi’s earlier tattoo artist, McMullen, wasn’t a fan of her clever hashtags, and called the singer out in an Instagram comment, accusing her of being a “drunk ass” who never paid for the ink in the first place.

It really is completely necessary for us to share the entire epic comment from McMullen, which went like this: “Cool post @ddlovato, thanks for getting the tattoo covered up I did for free that you specifically asked for. Not to mention you didn’t even have the courtesy to offer me any money in the first place. You pissed all over our toilet seat and you made a fool of yourself. What a shame that people look up to you. The tattoo you covered it with kinda sucks too. Looks like you might forever be a goon. #demilovato #scumbag #turd #claimstobesober #drankallthebeer #peepeetoiletseat #yousuck.” 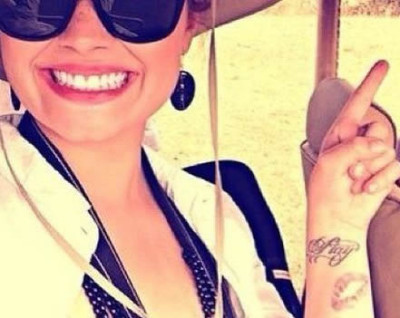 Since Demi Lovato has been extremely open about her struggles with substance abuse in the past, the comment from McMullen comes off as a tad verbally abusive and also extremely bitter, especially since the incident took place FOUR YEARS ago. I mean, get over it, are we right? When she finally responded to the comment, Demi had this to say: “Dear Ashley McMullen, I wasn’t going to acknowledge your bitter Instagram comments but since your side of the story has picked up some headlines, I would like to share my thoughts and send you a proper apology. First, I would like to say I’m really sorry I don’t remember you or getting tattooed by you, but as you know I was f—ked up and sometimes people act like ‘#turds’ when they’re loaded.”

Demi went on to say that perhaps the tattoo artist shouldn’t be so eager to claim the ink, being that her little sister said it looked like a “butt hole” at the time she had it done. Demi finished her epic apology to McMullen by writing, “I also wouldn’t be admitting to the fact that you tattooed a very intoxicated 18 year old on a tour bus without the proper judgement that most legit tattoo artists have of saying ‘Hmm…This underage kid is wasted, maybe I shouldn’t permanently ink a hot pink kiss mark on this girl’s wrist…? Oh well, F—k it, she’s famous. But you’re right, I should give credit where credit is due, and you Ashley, surely deserve credit for this one. #justputitonmytab.” Owned.