You may think that Demi Lovato’s “peace” and “rock n roll” finger tattoos speak for themselves, but the pop star revealed in a recent interview that the ink actually serves another purpose – it reminds her not to give other drivers the finger when behind the wheel. Wha?! Who would have thought that Demi Lovato – beloved pop star and former Disney darling – would have such a bad temper? Well, it turns out she is human, and she gets just as pissed off behind the wheel as the rest of us! Demi Lovato loves getting inked, but many of the singer’s tattoos also serve as reminders for her, including her “stay strong” and “you make me beautiful” ink, so it’s no surprise that the singer’s finger tattoos are pulling double duty as well.

When discussing the meaning behind her finger tattoos, Demi said: “Well one’s like ‘f**k yeh, rock and roll!’ And the other’s a reminder not to flip people off when I’m driving.” Apparently sweet, innocent Demi used to flip other drivers the bird when they beeped at her on the road. But her “peace” finger tattoo has inspired her to be more positive in life (and in frustrating situations behind the wheel), and now she takes a different approach when faced with rude drivers. “Now when I’m driving, and someone honks at me, I smile at them and it makes them so angry,’” the singer joked. “It’s funny to me because they get so much angrier and I’m like, ‘You just made my morning by being an a**hole.’” 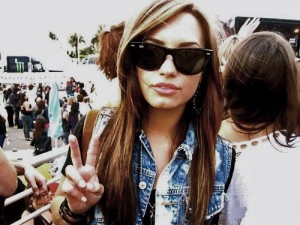 The tattoo in question is the word “peace” that Demi had inked on the inside of her left-hand middle finger back in 2011. The tiny finger tattoo is so discreet that even Demi’s dad didn’t know about it at the time, but we have a feeling he would have approved of her reason for getting the tat inked anyway. Kudos to Demi for finding inspiration to take the high road and not let other people get under her skin. Speaking of which, we have a feeling Rihanna had a similar motive for getting her “love” tattoo on her middle finger. Maybe we should all join the club and consider getting “peace” and “love” finger tattoos à la Demi and RiRi!