We’ve got the news you’ve all been waiting for! Demi Lovato has finally added a new tattoo to her collection, this time paying tribute to her biological father, Patrick Lovato, who passed away this past summer. It was way back in May 2013 that Demi had the phrase “I’m a warrior” inked on the back of her left shoulder, and we’ve been waiting the six months since for the inked-up pop star to reveal her latest tattoo addition. While most of Demi Lovato’s tattoos relate to the struggles she faced as a teen, including the “Now I’m a warrior” tattoo on her back, tattoo number thirteen for the singer is a Roman numeral dedicated to her dad. How sweet!

During an interview with The Late Late Show’s Craig Ferguson on December 10, 2013, Demi Lovato revealed her new Roman numeral tattoo, saying: “I just recently got this little guy; it’s still healing. It’s the Roman numeral three. It means a lot to me ’cause my Dad, it was like his number. He was obsessed with Dale Earnhardt and he passed way this summer, so I wanted to do something positive.” Demi Lovato’s tattoo tribute to her father is inked on the outside of her left wrist – near her lips tattoo – and features three small vertical lines inked in black, forming the Roman numeral three. The wrist tattoo is small, discreet and very personal. 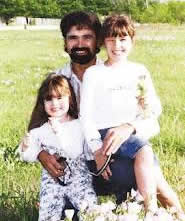 Although Demi says her stepfather (and mother) raised her basically her entire life, the singer’s biological father obviously had a big impact on her life. According to Demi, she had a strained relationship with Patrick Lovato, who suffered from mental illness and alcohol abuse and split from her mother when Demi was only two, which she touches on in songs like “For the Love of a Daughter” and “Shouldn’t Come Back.” Back in June though, when Demi’s father succumbed to cancer, she tweeted that attending his funeral was “the hardest thing” she has ever done. She also tweeted this message: “There’s an overwhelming sense of peace knowing my dad is no longer battling his demons anymore and that makes me so happy…”

Before Demi confirmed that her new tattoo was inked in honor of her father, many people assumed the ink was a tribute to her relationship with long-time boyfriend Wilmer Valderrama. Judging by some of the other relationship tattoos out there – many of which end up being removed or altered when the relationship ends – we’re glad Demi chose to honor her father instead!