Drake unveiled a brand-new tattoo of a flaming skull this week, and the ink is likely a nod to the new single of the same name by Andre “Popcaan” Sutherland, a Jamaican deejay, singer and songwriter that has exploded on the dancehall scene recently. Drake’s new tattoo, inked on the upper part of his left arm, features a pretty bad-ass flaming skull done in black and gray ink, with the word “unruly” inked below it in a stylized font.

Dr. Woo is the mastermind behind Drake’s new “unruly” tattoo, and the celebrity tattoo artist posted a photo of the fresh ink to his Instagram account on November 10, captioning the black and white snap, “Hot skulllll for the Boy @champagnepapi.” This flaming skull piece marks tattoo number 23 for Drake, who just revealed a matching camouflage shark tattoo with Rihanna in September.

Drake is known for getting tattoos dedicated to the artists he supports or is inspired by, and just last year, the rapper got a “bbk” tattoo on his left shoulder/collarbone as an homage to north London grime group Boy Better Know, and grime legend Skepta. He also several tattoo tributes to the late singer Aaliyah, who was killed in a plane crash in August 2001. Drake never actually had the opportunity to meet Aaliyah before her tragic death, but the rapper has said in the past that he remains one of her biggest fans. 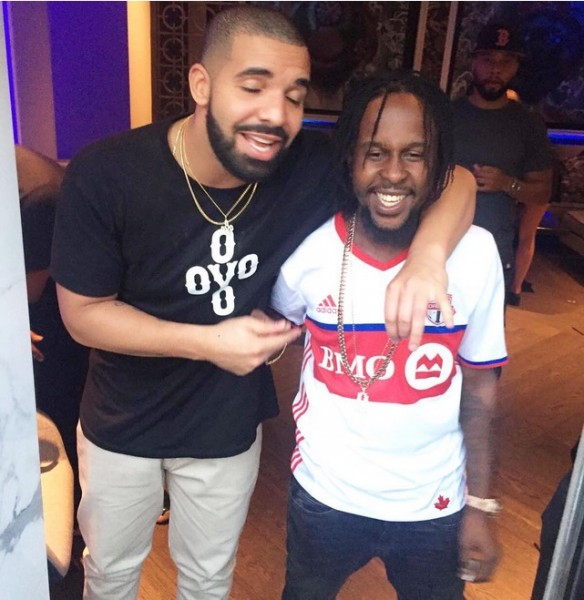 Despite the fact that Drake dropped Popcaan’s verse from the final version of “Controlla,” the Canada rapper has maintained a close relationship with the Jamaican dancehall star, and after debuting four of his own songs during his OVO Sound Radio birthday set last month, Drake debuted Popcaan’s new track “Unruly.” He is apparently a big fan of Popcaan and his music, and now he has a permanent tattoo to prove it.

During a 2014 interview with The Guardian, Popcaan talked about his early years, before he was considered the biggest name in dancehall, a genre of urban folk music that came out of Jamaica in the 1970s and is considered to be the predecessor of rap. “I used to get a vision that one day I would be a big dancehall star. I used to tell my sister, ‘I’m gonna get big in music.’” With projects in the works with Snoop and Pusha T, and the title of his new single permanently emblazoned on Drake’s arm, we think it’s safe to say that Popcaan’s dreams are well on their way to coming true.