If there are two pop culture icons we never thought we’d see depicted in the same tattoo, it’s got to be Drake and Bart Simpson. But we all know that when it comes to fan tattoos, where there’s a will, there’s a way, and a tattoo artist from Toronto proved this very thing just last week with an epic Drake-as-Bart-Simpson tattoo. The Drake tattoo, which was inked last weekend by Franz Stefanik of The Okey Doke Tattoo Shop in Toronto, features Bart Simpson rocking Drake’s recognizable fade and a large number “6” chain, with the Toronto skyline as a backdrop.

We can tell you’re just dying to know why some dude in Toronto decided to get a tattoo of Drake as Bart Simpson. Well, it turns out that Mr. Franz Stefanik has a “get what you get” system in place at his tattoo shop, which means he puts random sketches into a vending machine, and whatever sketch customers receive is the tattoo they get. Makes sense now, right? Except that the lucky recipient of this Drake-Bart Simpson tattoo didn’t let Fate decide his future. He saw the sketch in the vending machine and decided then and there that he couldn’t live without the ink.

Amazing Drake fan tattoos come around all the time…remember the chick with the Drake tattoo on her forehead, and the guy who tattooed Drake’s If You’re Reading This It’s Too Late album artwork on the back of his neck?? 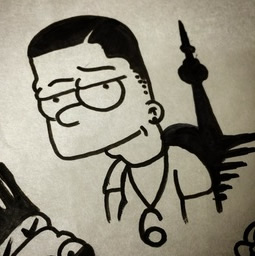 Whether he means to or not, Drake seems to inspire some of the most memorable – if not the most attractive – fan tattoos, and that is definitely the case with this Drake tattoo. So what about you guys? Would you go under the needle for an epic tattoo that featured your favorite artist as a cartoon character?? Give us a shout in the comments section below and let us know!