One of Drake’s earlier tattoos is inked on the upper left part of his back and features a pink songbird in flight with overlapping alphanumeric text below the bird, reading “XO20” in black and red ink. Drake’s back tattoo is definitely unique and there is quite a bit of controversy related to the true meaning of the songbird tat. Fortunately for all you Drake fans, we’ve got the inside scoop on the meaning of all the Young Money singer’s tattoos, including the rose-colored bird ink. Drake’s songbird tattoo is inked overtop of his left shoulder blade, directly above the controversial tat the singer has of Aaliyah’s portrait. The pink bird tat is located in basically the exact same spot as the owl tattoo on the other side of Drake’s back, which is appropriate considering both tats are a shout-out to the singer’s crew.

Alright, you better get out your secret decoder ring, because, just like Drake’s owl tattoo, the meaning behind the singer’s songbird tattoo is slightly complicated. First thing’s first: right below the bird in his back tat, Drake has the letters “XO” inked in black. Unless you’re a Drake stan, you may not be hip to the fact that XO refers to Drake’s protegé, Canadian R&B artist Abel Tesfaye, a.k.a. “The Weeknd” (no E, folks). Drake and The Weeknd have collaborated on a number of tracks, including “Crew Love” and “The Zone,” both of which mention “that OVO and that XO.” The acronym “OVO,” which appears in Drake’s owl tattoo on his back, stands for “October’s Very Own,” and is the name of Drake’s brand and clothing line. Although XO refers to The Weeknd, it actually stands for ecstasy (X) and oxycodone (O), which are apparently two of the singer’s favorite drugs. In fact, The Weeknd’s tagline is “XO Till We Overdose.” 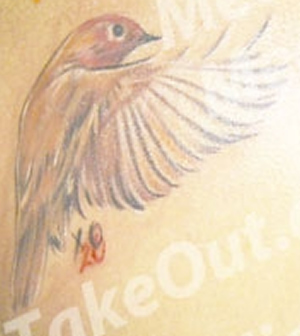 Drake and The Weeknd Connection

Although Toronto-based Abel Tesfaye began uploading songs to YouTube under the name “The Weeknd” in 2010, Drake has been partially credited with generating public awareness for the singer, since he quoted a line from the track “Wicked Games” on Twitter and linked to The Weeknd’s music on his website.In 2011, Drake and The Weeknd’s collaborated on a 21-song mix tape called OVOXO, and The Weeknd performed as a special guest at Drake’s OVO Fest in Toronto that same year. Now that we’ve fully explained the “XO” in Drake’s songbird tattoo, you’re probably wondering what the “20” and the bird itself represent. In his song “Crew Love,” featuring The Weeknd, Drake includes the lines, “20, keep the bar rolling” and “Tell em Imma need reservations for 20,” both of which refer to Drake’s “crew” of 20 friends. Oh and get this, The Weeknd has received quite a bit of praise from numerous music publications, including MTV, Pitchfork, BET, XXL, Rolling Stone, and The Source, which have dubbed him the “Songbird of his Generation.” Hence, the songbird in Drake’s back tattoo. 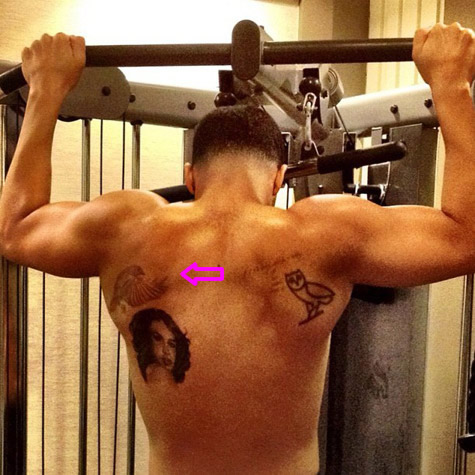